Defending champion Phil Mickelson will not play at this year's PGA Championship and this sparked outrage among golf fans on social media. 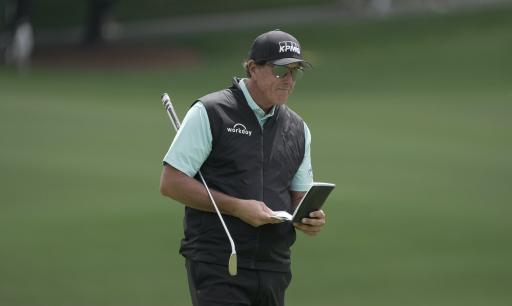 It was the news that no one wanted to hear on Friday evening, but unfortunately, it came. Phil Mickelson will not be playing at the PGA Championship next week.

Mickelson hasn't played at a golf tournament since February after he colluded with Saudi Arabia in preparing the launch of what is now the LIV Golf Invitational Series.

His strong words to biographer Alan Shipnuck with regard to the atrocities that the Saudi regime has committed, relating to the murder of journalist Jamal Khashoggi, have led to his exile from the PGA Tour.

In a statement in late February, the six-time major champion apologised for his actions but continued to describe those behind the Saudi Golf League as "visionaries."

There was a suspicion that Lefty would play at Southern Hills next week as the defending champion. He became the oldest major winner in the history of the sport at Kiawah Island in 2021.

"We have just been informed that Phil Mickelson has withdrawn from the PGA Championship," said the PGA of America.

"Phil is the defending champion and currently eligible to be a PGA Life Member and we would have welcomed him to participate. We wish Phil and Amy the very best and look forward to his return to golf."

The LIV Golf Invitational Series is set to start on June 9 at Centurion Golf Club near London, but as the PGA Tour and the DP World Tour have rejected player releases, it will be interesting to see which players will now play on the tour commissioned by Greg Norman.

Golf fans on social media weighed in on Mickelson's withdrawal, so here are the best comments:

"Just further evidence that shows Phil's capacity for poor judgement. But I suppose a guy who is capable of going into debt betting on golf to the tune of $40 million is not going to see how this will likely turn out as well," another fan commented.

"I bet he doesn't withdraw from the US Open, he really wants that one for the career grand slam," one fan commented.

"Love Phil he needs to remember where his stuff came from! And stop gambling!" another fan said.

"Phil will be the first player to take the PGA to court on this and once he does the PGA as we know it is done. Grab some popcorn folks - it’s about to get interesting," one fan said.