Jordan Spieth describes his incredible shot after going low in the second round of the AT&T Byron Nelson on the PGA Tour. 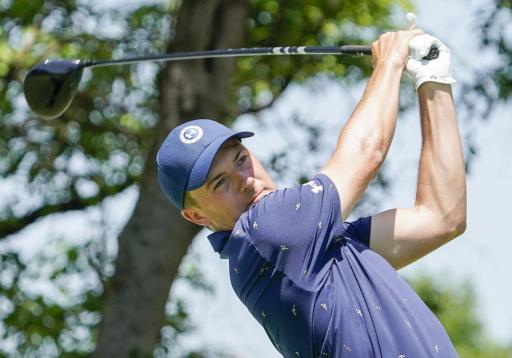 Jordan Spieth says an early tee time announcement left him a bit flustered which led to a bad swing before he played a miracle shot during Friday's second round at the AT&T Byron Nelson on the PGA Tour.

Spieth began his day at the 10th hole at TPC Craig Ranch and sent his drive out way right and left himself with what looked like impossible shot.

From there, Spieth managed to get his ball onto the green in what the PGA Tour commentary team described as "the shot of the year".

Spieth managed to safely two putt for par and made three consecutive birdies from the 11th hole to make the turn in 3-under.

More birdies followed at the second, fourth, fifth, sixth and the ninth for the 28-year-old. He made bogey at the par-3 7th on his way to a 7-under 65. He carded a 67 in his first round

Spieth told the media of the shot: "I didn't know how the ball got there. I thought it kind of was directly behind the tree from the tee box, which is just very, anyway, I could lineup maybe left side of the left greenside bunker, so if I could just get a good somewhat of a strike on it.

"I could get enough cut spin, I knew that, I just needed to carry far enough to carry the rough.

"I wasn't exactly sure, I didn't, I maybe didn't expect to hit the green but I thought that getting it out and up near the front of the green was certainly a possibility.

"And I've, when you spend a couple years having a lot of those shots, you start to learn how to hit 'em and so when you are playing better and you happen to be in a tough spot you get a little, you've had a little more practice, I guess is the best way to put it."

Spieth was asked if he felt it gave him some momentum for his round. In fact, he was in the restroom and his tee time was announced early, he revealed.

"I would say I walked up still believing I was going to make par.

"If I had made birdie I would have thought, wow, I really stole one here.

"I kind of, I mean all things considered, I didn't walk away feeling like, oh, that's a huge momentum boost or anything I was just like, man, we actually got announced three minutes early to tee off, which has never happened, so they were announcing and I was like, whoa.

"I had just come back from the restroom and I was like, I guess I'm going.

"And I just kind of stepped up and never really looked at my book and just put a really bad swing on it and I was more just thinking about that than I was anything else.

"I mean such an easy hole if you hit the fairway. And once I walked up there, par was going to be a good score, for sure."

By the time Spieth had reached the clubhouse, he had moved himself up seven positions on the leader board for a tie for fifth.

Ryan Palmer, Scottie Scheffler's team partner at the Zurich Classic, carded a 10-under 62 to sit atop the leader board at 15-under par.

England's David Skinns was on the same score alongside round one leader Sebastian Munoz, one stroke ahead of the United States' Justin Lower.

Charl Schwartzel is two shots off the pace, Joaquin Niemann matching Spieth on 12-under par.