Hideki Matsuyama hits the most OUTRAGEOUS flop shot of the PGA Tour season! 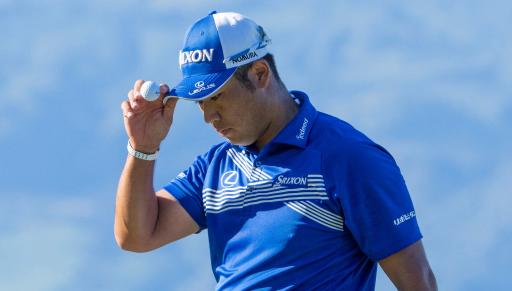 Masters champion Hideki Matsuyama holed the greatest flop shot of the PGA Tour season so far on day two at the Sony Open.

Matsuyama was in the deep rough left of the green some 100 feet away from the pin at the par-4 6th.

WATCH: HIDEKI MATSUYAMA WINS THE SONY OPEN AFTER A MOMENT OF MAGIC AT THE FIRST EXTRA HOLE!

An up and down for par seemed the best possible result but the Japanese star had other ideas as he brought out his inner Phil Mickelson.

Matsuyama went straight upstairs with his lob wedge and judged the slope beautifully to hole out for a birdie-three.

EQUIPMENT REPORT: HOST OF NON-CONTRACTED PLAYERS STICK THE NEW TAYLORMADE STEALTH DRIVER IN THE BAG AT THE SONY OPEN

Matsuyama hit one of the funniest shots of the first round when he took one hand off the club at impact, only for the ball to end up 11 feet away. He would then drain the putt for birdie - WATCH HERE

The seven-time PGA Tour winner is looking to chase down Russell Henley in the second round at Waialae.

Henley, who won his maiden PGA Tour title at the 2013 Sony Open, has fired rounds of 62 and 63 so far this week as he looks down on the rest of the field at 15-under par.

The American incredibly played his final six holes in 6-under par, and he also eagled both of the par-5s at 9 and 18.

NEXT PAGE: RUSSELL HENLEY HITS THE FRONT AT THE SONY OPEN AFTER PLAYING HIS FINAL SIX HOLES IN 6-UNDER PAR