Justin Thomas decided to take aim at Max Homa after it was revealed filming will beging on a behind-the-scenes Netflix documentary about golf. 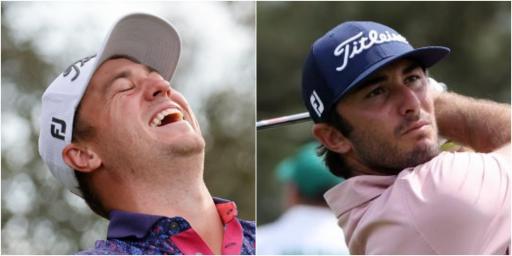 Justin Thomas decided to take aim towards the king of roasts Max Homa on Twitter this week.

Thomas, 28, decided to pick up on Homa's grammar after the news was revealed Netflix will be making a documentary about the PGA Tour.

Produced by the same people who made the popular Formula One show Drive To Survive, filming has already started.

Although several big players have decided not to take part in the behind-the-scenes show, Homa is apparently beaming about it.

More: Hideki holes out with an outrageous flop shot

Homa is one PGA Tour player who appears to be more engaged with social media and has become a sensation in roasting peoples' swings.

Hundreds of fans send in clips of their swings and he responds with some amusing barbs.

There is no doubt his personality will inevitably shine in the documentary.

I can’t believe imma be on Netflix lol

What did you do with all the time you saved typing “imma” and not “I’m going to”?

More: How bad is cheating at your golf club?

The deal for the show, which is yet to be named, was one of the worst kept secrets in golf.

It will see cameras go behind-the-scenes for players taking part with filming also scheduled for every single major.

The Players will also feature, which is the richest tournament in golf.

There is also unprecedented access to the season-ending FedEx Cup and Tour Championship at East Lake.

Patrick Cantlay is the reigning champion and already it has been announced the winner will get even more cash this year.

It has been reported that the winner will receive $18 million alone.

Bryson DeChambeau has decided he didn't want to take part, citing that he felt it was too invasive.

He also said he didn't want to detract from other players and feels his YouTube content shows enough of his personal life.

The full list of players who will be filmed include: