Hideki Matsuyama came close to winning the ZOZO Championship in 2019, and he started well in Japan again on Thursday. 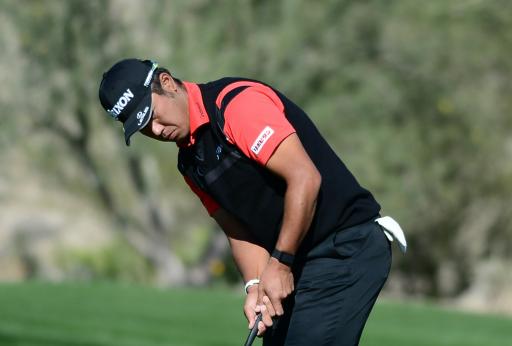 Hideki Matsuyama thrilled his home fans in the first round of the ZOZO Championship, firing a solid score of 64 to trail by one shot from Hiroshi Iwata.

Matsuyama, who came second to Tiger Woods at this event in 2019, began with three birdies in his opening six holes. He put on a superb display from the sand on a number of occasions at Narashino Country Club.

The Masters champion added three more birdies in his last six holes to complete a bogey-free round of 6-under-par. He sits one shot behind fellow countryman Iwata, who fired a round of 63.

Matsuyama won his first title on the PGA Tour at Augusta National in April after a four-year drought, and he struggled to find consistency during last season.

The 29-year-old only achieved three top-10 finishes in 27 events in 2021, so this week in Japan could help to ignite his best golf.

Never judge a Hideki shot by his reaction.

He sinks the birdie putt to get to -4. pic.twitter.com/NuiR8vrZDZ

Joaquin Niemann also fired a round of 6-under-par, while Englishman Matt Wallace is a further shot back on 5-under-par.

Xander Schaaffele, returning to the nation where he won his Olympic gold medal in the summer, shot a conservative round of level-par in the first round of the ZOZO Championship.

The four-time major winner made four birdies and four bogeys on Thursday to join Rickie Fowler on level-par and is currently in a tie for 29th place.

RELATED: PGA TOUR: HOW TO WATCH ZOZO CHAMPIONSHIP PLUS ROUND 1 AND ROUND 2 TEE TIMES

Fowler, who came tied third at the CJ Cup in Las Vegas last week, is looking for his first win on the PGA Tour since he won the Waste Management Phoenix Open in 2019.

Open champion Collin Morikawa posted a disappointing score of 1-over-par. He is eight shots behind Iwata after 18 holes.