After his first round at the ZOZO Championship, Rickie Fowler stepped into the Golf Channel broadcast booth. 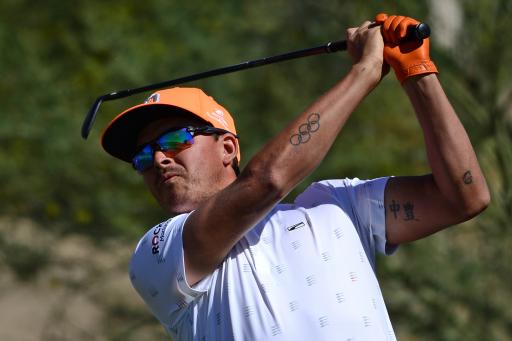 Rickie Fowler started the first round of the ZOZO Championship well and he was replicating the form that he showed at last week's CJ Cup in Las Vegas.

However, the 32-year-old stumbled to an astounding triple-bogey on the par-4 17th hole at Narashino Country Club, which was his eighth hole of the day.

Fowler, looking for his first win on the PGA Tour since 2019, finished with a round of level-par. He is seven shots behind Hiroshi Iwata, one of the Japanese home favourites.

After Fowler finished his round, he stepped into the Golf Channel broadcasting booth to join George Savaricas to offer some analysis on the rest of the day's play.

Hideki Matsuyama hits shot of the year so far to win Sony Open
Bryson DeChambeau on Cobra Golf: "We came to a bit of a sticking point in 2021"

RELATED: CAN THIS PLAYER MOVE THE OVERHANGING TREE TO TAKE HIS TEE SHOT?

A surprise this week with a “player takeover” of the booth…Have a different player joining us after each round, going to be a lot of fun -

Savaricas tweeted before the first day's play that Golf Channel are running a 'player takeover' in the commentary booth at Narashino Country Club this week.

He revealed that Fowler would be the first player to step into the gantry and it was a refreshing change to hear a player, who had just played the course, offer his views and analysis of his competitors.

Recalling his triple-bogey on the 17th hole, he and Savaricas watched Hideki Matsuyama hit a solid tee shot down the same hole.

"Coming right back to where my hiccup was today. That drive would have saved me a few shots," Fowler joked.

The five-time PGA Tour winner was not in the booth for long, however, his analytical skills were extremely impressive and we are excited to see who will join Savaricas in the next three rounds.