Viktor Hovland has made a strong start as he attempts to complete a rare three-peat on the PGA Tour at the World Wide Technology Championship at Mayakoba. 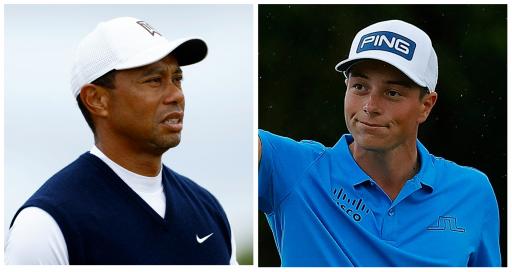 Viktor Hovland says he couldn't have asked for a better start as the defending champion of the World Wide Technology Championship at Mayakoba on the PGA Tour as he attempts to complete a rare three-peat.

The Norwegian fired an opening round of 6-under 65 at El Camaleón Golf Course. He started on the back nine and turned in level par before making four birdies and a spectacular eagle at No.7 in what he described as a frustrating day.

Hovland won this tournament in 2020 and 2021. In the last 40 years on the PGA Tour, only Tiger Woods, Stuart Appleby and Steve Stricker have won the same event three times in a row.

Woods, who has this week teamed up with Lewis Hamilton in the battle against LIV Golf, has done this six times. He's also completed a four-peat twice.

Hovland won the 2020 edition of this tournament with a score of 20-under par, beating Aaron Wise by a single stroke. Last year, he fired a tournament record of 23-under and won by four.

Hovland had an interesting time here last year as he snapped Danny Lee's driver in a speed training session.

At the beginning of the week Hovland admitted that he's not a big goal setter despite working hard in his "off season". He also said he would likely be playing more in Europe after the PGA Tour announced elite players would be allowed to skip on of their elevated events.

He played alongside Scottie Scheffler (65) in the first round, who is attempting to kick Rory McIlroy off the top spot in the Official World Golf Ranking with a win.

Hovland told the media of his opening round:

"Yeah, it was an interesting day. I started on the back nine and made a nice birdie on 11, made a really nice up-and-down on 12. Hit in the middle of the fairway on 13 and thought I was going to add another birdie on the card, but hit a terrible shot in the water and made a bogey. The back nine was kind of, I hit a lot of good shots, made a birdie and then we just kind of would give it back right away. So the back nine was a little bit frustrating, but yeah, the front really put me back in the tournament, so that was a lot of fun."

The 25-year-old is searching for his fourth PGA Tour victory.