Danny Lee was doing a speed-training session and Viktor Hovland offered his own driver to see how his swing speed would differ... 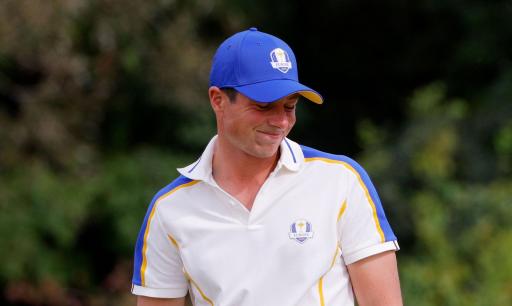 It was panic stations for Viktor Hovland on Wednesday at El Camaleon Golf Club when Danny Lee snapped the Norwegian's driver in three places.

Lee finished in a tie for second place at the Butterfield Bermuda Championship last week and on Wednesday, he was doing a speed-training session.

He reached around 185mph with his swing, so Hovland wanted to see if he could swing faster if he used his PING G-425 driver, which was an inch longer.

This didn't last long as Lee swung down and destroyed the shaft.

RELATED: MATTHEW WOLFF: WHAT'S IN THE BAG OF THE ONE-TIME PGA TOUR WINNER?

"That was very unexpected, I felt so sorry for him. If I had a spare driver, I would have given it to him, but I didn’t, "said Lee.

"I just looked up after he hit the shot and it was in pieces," Hovland added.

Luckily, fellow PGA Tour competitor James Hahn was on the scene to offer a helping hand. He had another PING G-425 driver with almost the same specs as Hovland's shattered club.

Kenton Oates, a PING representative on the PGA Tour, said that the driver that Hovland used in the first round of the World Wide Technology Championship was the same model, loft and swing weight as his original driver.

RELATED: IN MAYAKOBA, MATTHEW WOLFF SIZZLES AS ANOTHER PLAYER STARTS WITH A HOLE-IN-ONE

It proved not to be an issue for the 2021 Ryder Cup debutant. He only missed two fairways and he fired a solid score of 4-under-par on Thursday in Mexico.

"As soon as I hit a couple with it, I was like, ‘This feels pretty nice. I think I can work with this,'" Hovland said.

His driver essentially couldn't deal with the aggressive recoil of Lee's swing. Perhaps Hovland may consider using similar specs to James Hahn next year, looking back on his performance off the tee with the American's spare driver.

NEXT PAGE: BRYSON DECHAMBEAU RESPONDS TO LETTER SENT IN BY HIS BIGGEST YOUNG FAN