PGA Tour pro Grayson Murray has revealed the nasty cuts he sustained when he was involved in a scooter crash before the Butterfield Bermuda Championship. 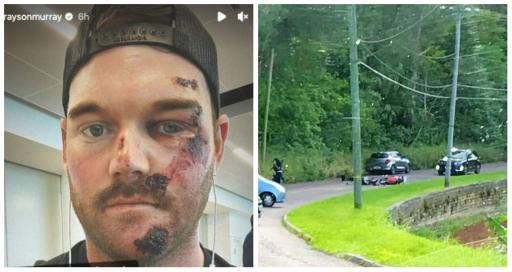 Grayson Murray has thanked PGA Tour staff, caddies and well-wishers after revealing the nasty cuts he sustained during a scooter crash before the Butterfield Bermuda Championship at Port Royal Golf Club.

News quietly filtered through on the official PGA Tour website last week that Murray, 29, was forced to withdraw from the $6.5m stop which was later won by Ireland's Seamus Power after an almighty back nine collapse from Ben Griffin.

It then emerged that Murray was involved in crash in which he collided with a car head on.

It also transpired that Murray's caddie Doug Schwimer was also riding a scooter at the time, but he suffered minor injuries.

Murray later told Golfweek that he sustained 50 stitches, 25 of which were on his face. He was also reportedly knocked unconscious.

"Honestly, I’m pretty fortunate because the helmet saved me. If it wasn't for my knee and stitches in my left hand, I would try to play. It is nobody’s fault. Riding on the opposite side of the road is already confusing and the roads in Bermuda are narrow and sketchy."

Now Murray, who has revealed he has battled alcoholism, has taken to Instagram to thank well wishers.

Murray, who was involved in this heated moment during the 2022 U.S. Open at The Country Club at Brookline, said he was sober at the time of the crash.

"Headed back home. Thank to you the PGA tour staff for all the help the last couple days and all the well wishes I got from players/caddies and y'all. much love."

Murray's caddie suffered a road rash and later carried the bag for an alternate in the field in Bermuda.

The next stop on the PGA Tour is the World Wide Technology Championship at Mayakoba, where Viktor Hovland is attempting to win the tournament for the third year in a row.