James Hart du Preez, a South African golfer who stands at 6-foot-9, makes his PGA Tour debut at the American Express this week. 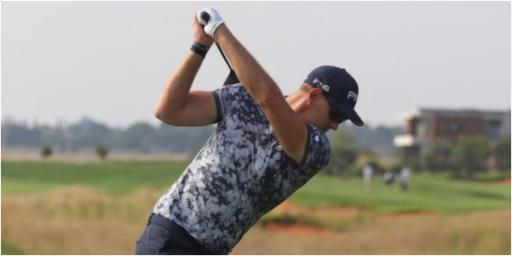 He's featured on the YouTube channel of James Wiltshire, a content creator who is documenting his journey in the pro game on the mini tours.

Last year, a few videos filtered through about the South African golfer who was being described as hitting it farther than anyone, even Bryson DeChambeau.

Well, at 6 feet 9 inches tall and weighing in at more than 260lbs, you'd expect him to send it.

And the 26-year-old does send it. Miles.

More: What is the latest on Tiger Woods?

More: The worst air shot we have ever seen

How far does he hit it?

Du Preez played the 2020-21 season on the Sunshine Tour in South Africa.

According to those statistics, he averaged 373.1 in driving distance.

The ball speed? Only 210mph give or take.

Wilco Nienaber, also from South Africa, averaged 323.31 yards off the tee on the European Tour in 2020-21 as their biggest hitter.

This season on the PGA Tour, Chan Kim is averaging 329.3 yards.

How can I watch him?

This week on the PGA Tour, du Preez will make his PGA Tour debut at the American Express in Palm Springs, California.

Watch his swing below:

What is his story?

Du Preez is said to have started playing golf at the age of three.

He played cricket in school but then turned his attentions to golf properly.

The South African turned professional in 2018.

He has already made 16 appearances on the DP World Tour and made five cuts.

The massive athlete has had a few problems with injuries over the years but he is looking to earn his PGA Tour card.

We at GolfMagic tentatively suggest he has the distance... just.

But has he got the skill around the greens to succeed?