Tiger Woods returned to golf in December 2021 and speculation is rife about when he will play again. We break it all down here. 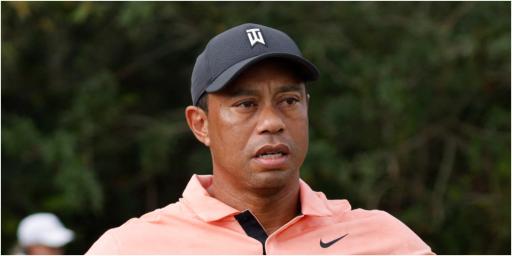 Tiger Woods has returned to his rehab programme after treating us to a sight we never thought we would see.

His performance at the PNC Championship alongside his 12-year-old son Charlie Woods was truly remarkable only months after his car crash.

Yet such is his draw Woods is being discussed on a weekly basis on golf broadcasts around the globe.

Speculation is rife about when and where he will return. Some suggest the 150th Open at St Andrews will be his last hurrah.

Others have suggested he will simply grind hard all year and play again at the PNC Championship in December before returning for a few events in 2023.

Even though the PNC Championship last month wasn't exactly a serious tournament, there were still glimpses. Moments where you believed.

So where is Tiger Woods now?

Woods has been pictured in Los Angeles alongside his girlfriend Erica Herman.

He also told the world he will be returning to his Florida home in Jupiter to continue his programme at the PNC Championship.

There are no days off.

Last October, GolfMagic spoke to Poora Singh, a leading osteopath based at the Edgbaston Performance Clinic.

Singh also works on the Race to Dubai physio unit and has worked with several golfers across Europe.

He admitted he would be astounded if Woods were to make it to Augusta National.

Related: What you may have missed from the comeback video

Related: Where next for Tiger Woods?

"Let’s break it down. You've got to go from a point from where the bone didn't even have any joints and then being bonded. And then once it's bonded, you have to start to put natural human force through it, which is like walking or walking upstairs.

"But imagine even trying to do a jog or a run. Those are all natural forces so he has to get to that point first. Then, you have to start putting the forces of golf through it as well. For him, that is going to be massive.

"It's going to be forces that have to be put through initially to get the bone to be happy with the force that it is taking, and the joint.

"After that, you need him to become competitive and world-class. I wouldn't want to rush back from this sort of injury - I would want to take a slow and steady approach to it."

Even Woods himself has poured cold water over trying to get to the Masters.

He could slap it around, we're sure. But he'd struggle walking the course over four days.

When are we likely to see Tiger Woods again?

Woods has never been the type of person just to show up.

So it's probably fair to assume he will be targeting The Open Championship.

Failing that, we're likely to see him play again at the father/son event again.

In public, we're likely to see Woods at the Genesis Invitational.

Woods, 46, is the tournament host.

He'll also be officially inducted into the World Golf Hall of Fame in March.

He was supposed to be inducted in 2021 but this was postponed because of the pandemic.

Related: Does Tiger Woods owe us an explanation?

Next page: Osteopath would be "astounded" if Tiger made it to Augusta National