How many shots would it take you to play this 1,100 yard hole?

The PGA Tour Twitter page posted an old clip of Dustin Johnson taking on a 1,100 yard hole ahead of the Sentry Tournament of Champions, but how many shots would it take you? 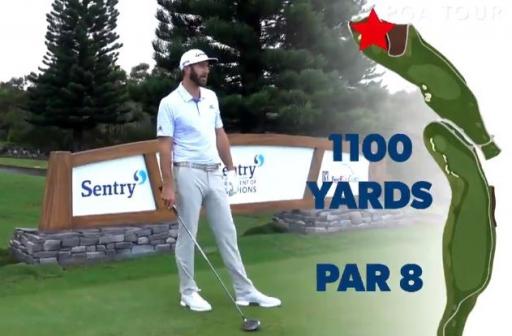 The PGA Tour returns to action this week at the Sentry Tournament of Champions and to get golf fans excited for the event, the PGA Tour's official Twitter account posted an old clip of Dustin Johnson taking on a 1,100 yard hole at Kapalua. But how many shots do you think it would take you?

Johnson has won the Sentry Tournament of Champions twice, with his last victory at the Hawaiian course just two years ago in 2018 when he cruised to an 8-shot victory over Jon Rahm.

The 1,100 yard hole that Johnson took on started by teeing off on the 18th tee and playing up to the 1st green. The World No.1 predicted that it would play as a par-8, so watch the video below to see how Johnson got on.

Not a bad score from Johnson, finishing a 1,100 yard hole in just seven shots, although he'll be hoping there are no sevens on his scorecard this week as he returns to Kapalua and makes his first start of 2021.

Johnson goes into this week's event as the favourite to win, but defending champion Justin Thomas will be hungry to kick off his year with a victory, whilst Bryson DeChambeau will also be looking to have his say.

Earlier today, TaylorMade announced they had extended their deal with Johnson, who has used the brand since turning professional 14 years ago.

"With all the challenges of 2020, it was one of my best years on the golf course," said Johnson. "TaylorMade was right there with me each step of the way, just like they’ve been for my whole career. There isn’t a better golf equipment company in the game, especially the guys out on Tour. I’m looking forward to being part of Team TaylorMade for a long time to come."