Justin Thomas shares the lead at the Sentry Tournament of Champions

Defending champion Justin Thomas shares the lead with Harris English at the Sentry Tournament of Champions after the opening round. 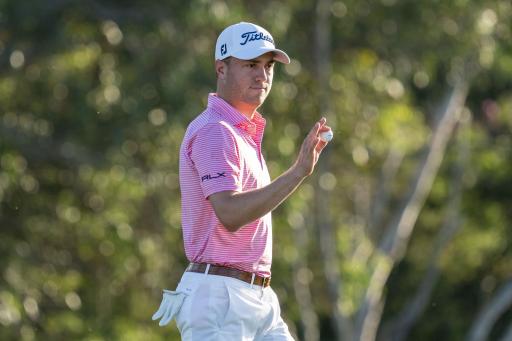 Aafter what he called a year of missed opportunities, Justin Thomas has got off to a great start as he defends his Sentry Tournament of Champions title, taking a share of the lead with Harris English after the opening round.

The World No.3 made three birdies in his last five holes to shoot a bogey-free 65 at the Kapalua Resort, where he has won twice in his career, to leave him at the top of the pile on 8-under par alongside English.

"I didn't do anything great, didn't do anything bad, just kind of made my way around the course," Thomas said. "The conditions were about as good as you could get them. Not much wind and soft greens, so I was glad to take advantage."

Six players find themselves in a tie for third and just two shots behind the leaders, including Sergio Garcia, Patrick Reed and Sungjae Im.

WATCH THE BEST SHOTS FROM DAY ONE BELOW:

The top shots from the first round of @Sentry_TOC. pic.twitter.com/t1ndC44Esv

Thomas was paired with Masters champion and tournament favourite Dustin Johnson, who will be disappointed not to have taken full advantage of the low-scoring conditions on Thursday, but finds himself in a decent position at 2-under par.

The World No.3's first birdie of the day came at the opening hole when he rolled in a 20-foot putt, before adding his second at the par-5 5th when he showed off his superb short game, getting up-and-down from just shy of the green,

Three gains in-a-row followed from the 7th hole, leaving Thomas 5-under at the turn.

A wayward tee shot at the 13th looked to have Thomas in trouble as his ball found the thick rough, but he showed his class on the green when he sunk a 35-foot putt to save par.

Thomas made two more birdies until he reached the par-5 last and after reaching the green in two, he two-putted for his final birdie of the day.

Co-leader English got off to a fast start with three birdies in his opening five holes and after dropping a shot at the 7th, he chipped in for eagle at the par-5 9th.

Four more birdies followed for English on the back nine, leaving him on 8-par alongside Thomas.

Bryson DeChambeau, who recently clocked 211mph ball speed as he prepared for this week's PGA Tour event, finds himself four strokes back in T12.