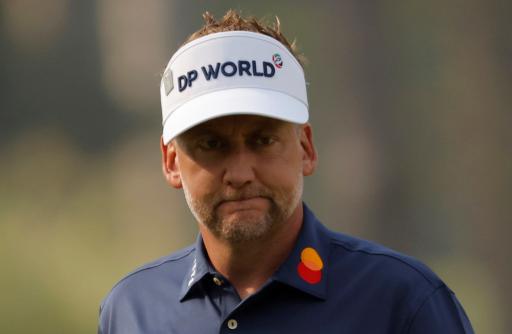 Ian Poulter has taken to Instagram to reveal his disgust at receiving an email declaring he has been playing too slowly under the 'PGA Tour's Pace of Play Policy'.

Poulter, who is teeing up in this week's Wells Fargo Championship at Quail Hollow, revealed the message he received earlier today via his Instagram Story, and he then captioned it with the following:

"I apologize to whomever I am playing with this week," wrote Poulter on his Instagram Story.

"This is the first time ever I have been told I'm .569 of a second slow. Sounds like some F1 cars.

"If I play out of turn then I am sorry. If I'm ready I am hitting."

The PGA Tour email to Poulter read as follows:

"I'm writing in reference to the PGA Tour's Pace of Play Policy. Under the new policy, any player with an overall average of 45 seconds or more per stroke over a 10-tournament rolling period will be on the Observation List.

"On an individual basis these players will be subject to a 60 second timing limit for all shots. If this time is exceeded, the player will be timed individually even if their group is in position.

"The Observation List will be updated on a weekly basis and will be kept confidential.

"Using individual stroke data from Shotlink, you have been identified as a player with an overall average of 45 seconds or more which would place on the Observation List for this week's Wells Fargo Championship.

"Your overall per stroke average is 45.569 seconds, up from 44.773 seconds going into the Valspar Championship last week.

"Additionally, you can find this information every week on the PGA Tour Member App under Performance / Pace of Play / Average Shot Time."

Poulter is currently ranked 64th in the world rankings heading into this week's PGA Tour event.

The Englishman will be bidding for some improved form this summer as he bids to make the 2021 European Ryder Cup side - something he is incredibly determined to achieve following a recent interview with Sky Sports Golf's Nick Dougherty and Andrew Coltart.

NEXT PAGE: GOLF FANS REACT TO POULTER'S HILARIOUS MAY 4 VIDEO