Poulter posts yet another belter of video on his social media platforms. 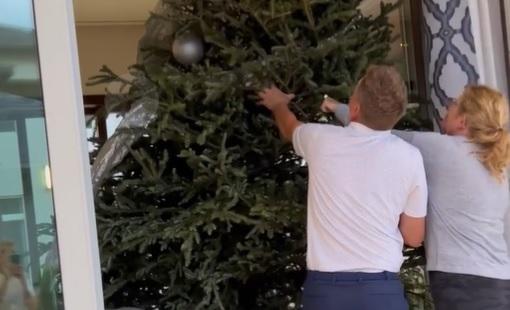 Ian Poulter has posted another hilarious video on his social media today of him struggling to get his giant Christmas tree out of his house.

Poulter, 45, has the most engaged account on social media out of every player on the PGA Tour.

In his latest video to the soundtrack of Kanye West - All Falls Down ft. Syleena Johnson, the European Ryder Cup legend and his wife Katie are seen to be struggling to get their huge tree out of the door.

Poulter, who is seen dragging it out of the door with bits of fir going everywhere, captioned the post: "Pre season workout was slightly different today."

Lee Westwood commented: "Going against the grain?" to which Poulter replied: "Yeah we had to turn her around to get it out of the gate."

Although Poulter had the most social media engagement out of the PGA Tour players in 2021, Phil Mickelson reportedly won the year-long Player Impact Program (PIP) despite many believing Tiger Woods would receive the accolade.

Woods did of course compete in the end-of-year PNC Championship alongside his son Charlie Woods as they finished second and two shots behind John Daly and his son John Daly II.