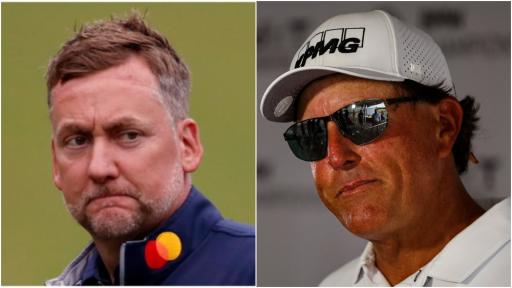 Ian Poulter has taken to Instagram to reveal he has the "most engaged account on social media out of every player" on the PGA Tour, and he has had some fun with Phil Mickelson in the process.

Mickelson reportedly won the year-long Player Impact Program (PIP) on the PGA Tour in 2021, despite many believing Tiger Woods would receive the accolade.

As a result of winning the new PIP last year, Mickelson apparently scoops $8 million in extra earnings, while Woods finished second and won $6 million despite not playing a single official PGA Tour event in 2021.

How "sexiest golfer in the world" K.H. Lee plans to celebrate repeat win
PGA Tour: How much did each player win at the AT&T Byron Nelson?

The PGA Tour created the new program to reward its players for bringing the most interest to the circuit. However, the Tour decided to not reveal the full results so everything has been kept confidential, just to add to the confusion for everyone else.

As for Poulter, well he did not even make the Top 10, according to his latest social media post, but he did at least get voted the most engaged account along with finishing fourth in the social index.

In classic Poulter fashion, he had some fun with it all to start the New Year.

Proud to be the most engaged account on Social Media out of every player & 4th in the Social index. Unfortunately didn’t get close to the PIP Top 10. So to all my engaged fans & social followers thanks for being supportive & a brilliant audience in 2021. Here’s to 2022 HNY pic.twitter.com/8POpo3yMDB

"Proud to be the most engaged account on Social Media out of every player & 4th in the Social index," said Poulter on his social media accounts.

"Unfortunately didn’t get close to the PIP Top 10. So to all my engaged fans & social followers thanks for being supportive & a brilliant audience in 2021. Here’s to 2022."

He then followed that up with a belter of he and Mickelson singing "U Can't Touch This" by MC Hammer:

Lee Westwood then commented on the post: "Getting out the PIP blocks fast in 2022?"

Poulter replied: "Well it didn't work in 2021. So stuff it might as well keep everyone entertained for free."

Many in the industry believe the PIP was introduced by PGA Tour in a bid to halt the world's best golfers from jumping over to a breakaway Premier Golf League.

While that has not exactly happened as of yet, Greg Norman was recently announced as the CEO of the newly-founded LIV Golf Investments.

The former World No.1 claims to have a primary objective of announcing a ground-breaking series of 10 new events to be staged on the Asian Tour over the next 10 years.

NEXT PAGE: JOHN DALY DISCUSSES HIS BEEF WITH TIGER WOODS AND WHAT HE TEXT AFTER CAR CRASH