Brooks Koepka then gets accused of "stealing" a tweet about Antonio Brown fighting Jake Paul. 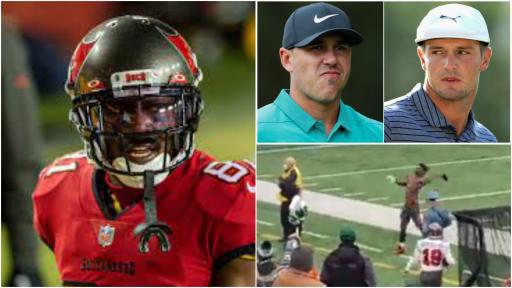 Bryson DeChambeau and Brooks Koepka have been reacting on social media to NFL star Antonio Brown sensationally walking off mid-game during Tampa Bay Buccaneers' tussle away at New York Jets on Sunday evening.

Brown, 33, stripped off his Tampa Bay jersey and pads, gestured to the crowd and then jogged into the locker room with more than a quarter of the game still to play.

Antonio Brown has a meltdown at the hand of the #Jets and #BraxtonBerrios pic.twitter.com/RGhSYpyrOu

Brown, who has a history of transgressions in the NFL, was apparently angered by a conversation with one of the team staff while on the sidelines.

Head coach Bruce Arians asked Brown to go onto the pitch but he apparently refused.

"That is the end of the story. Let's talk about the guys who went out there and won the game."

Hopefully everything is alright with AB. Sad to see things like this. I hope he can get some good help and get back on track.

DeChambeau, a keen NFL fan, took to social media to reveal compassion over the incident.

"Hopefully everything is alright with AB," tweeted DeChambeau.

"I hope he can get some good help and get back on track."

Koepka also got involved, but with a slightly different take on matters.

With Brown now bowing out of the NFL with Tampa Bay, rumours are circulating that the wide receiver will now consider fighting Jake Paul in the boxing ring.

At least if he's in need of a quick pay day, in the eyes of Koepka.

Hot take: AB will fight a Paul brother before the year is over

"Hot take: AB will fight a Paul brother before the year is over."

Wanna explain how you took it from elsewhere pic.twitter.com/fnCBSCHDwt

Tom Brady, who led a game-winning drive in the final minute for the Bucs, said: "We want to see him be at his best and unfortunately it won't be with our team.

"We have a lot of friendships that will last. I think everyone should be very compassionate and empathetic toward some very difficult things that are happening."

NEXT PAGE: JOHN DALY FIRES SHOTS AT BRYSON DECHAMBEAU OVER HIS LONG DRIVING