Ian Poulter: "You've got to be f***ing kidding me - THIS should not be here"

Ian Poulter's ball landed next to a sewage cover during the first round of the Northern Trust, but he was not entitled to free relief. 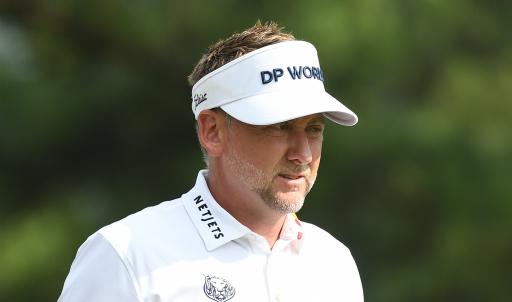 Ian Poulter experienced a massively unlucky break on the 15th hole at Liberty National, when his ball finished next to a sewage cover that he was not allowed a free drop from.

Poulter was 1-over-par walking down the 15th hole in the first round of the Northern Trust and when he saw where his ball had finished, it is fair to say that he was not happy.

Although his ball was resting against an immoveable obstruction, it was in a penalty area and according to the rules of golf, you are not entitled to free relief in these circumstances.

The Englishman could either play his ball as it lied, or he could take a drop but add a one-stroke penalty. As many of us would know, this was an extremely frustrating break for Poulter.

"You've got to be f***ing kidding me," he was heard saying silently under his breath.

If the 45-year-old had taken a drop at the expense of a one-stroke penalty, he would have been able to drop his ball on to the cart path, which he would have got free relief from.

Poulter played it as it lied and hit his ball back out towards the fairway. He ended up with a bogey-5 and finished his round with a score of 72, 1-one-over par.

"Unfortunately, he hit it against the only thing in there that he couldn't get relief from," said Paul Young, the rules official explained.

Although Poulter was annoyed by the situation, he accepted that it's one of those things that can happen on the golf course and he needs to be fully focused on recovering his score.

The 3-time PGA Tour winner did exactly that on Friday. He carded a great round of 5-under-par to propel himself up the leaderboard and in good shape to improve on his 79th place standing in the FedEx Cup.

"It's one of those, it's unlucky, right? You get some good breaks, you get some bad breaks. That was a pretty bad break. Over the season, you take the rough with the smooth," Poulter said after the incident.