Scheffler believes he took too long to find his ball in the rough - so called a penalty on himself. 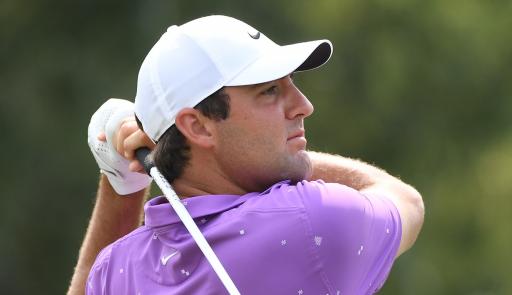 Scottie Scheffler called a penalty on himself when looking for a 'lost ball' on day one of the Northern Trust on the PGA Tour.

Scheffler was moving serenely up the leaderboard on 3-under par thru 14 holes in the opening round at Liberty National until problems arose on the par-4 15th hole.

The American drove left into the rough and then hit his second from just shy of 190 yards once again into the left-hand rough some 80 yards short of the green.

As Scheffler walked some 100 yards further down the hole, he realised nobody was able to locate his ball.

Eventually his ball was found, however, there was confusion over whether or not it had been located within the required three minutes.

Rule 18.2 - in regards the time a golfer can take to look for a 'lost ball' - was changed from five minutes to three in the latest set of rule changes in 2019.

After a discussion with a PGA Tour rules official, Scheffler decided he had probably taken just over the allocated three minutes and so went back to the original spot in the rough to play his fourth shot.

Scheffler found the green and two-putted for a double-bogey six to fall back to 1-under par, which is where he finished the round.

"We couldn't figure it out," said Scheffler after his round on the time taken to locate his ball in the rough.

"They didn't have ShotLink data or anything, so just went with it was over three minutes. Just too long."

Scheffler is currently 21st in the FedEx Cup standings. The top 70 players at the end of this week's Northern Trust will progress to the BMW Championship, with the top 30 after that event heading into the season finale for the FedEx Cup at the Tour Championship.

NEXT PAGE: JORDAN SPIETH NEARLY WIPES OUT BROOKS KOEPKA WITH HIS TEE SHOT AT THE NORTHERN TRUST