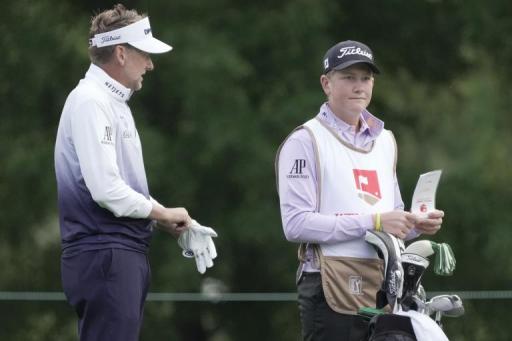 In a bizarre turn of events, Luke was putting for eagle on the 9th hole at the famous venue and he went to his knees as he thought he had holed the putt.

As he went to his knees, he dislocated his left knee. Paramedics were called to the green to tend to Luke and quite incredibly, they repositioned his knee cap and he was able to tap in his birdie putt.

Poulter said on his Instagram page that there was no serious damage done to Luke's knee, however, they were unsure whether he would participate in the final round of the tournament.

Luke was 8-over-par in the first nine holes of the 54-hole event and was sitting almost dead last in the field. But through his next 27 holes, he was 7-under-par and without a bogey, which is an extremely impressive score at such a tough golf course.

Earlier in the PGA Tour season, Luke caddied for his dad for the first time ever at the Wells Fargo Championship but unfortunately, the English due missed the cut.

A number of golf fans sent their support to Luke:

"Holy crap. That is crazy. Good luck and I hope he feels better tomorrow," another fan said.

NEXT PAGE: JORDAN SPIETH ADVISED BRYSON DECHAMBEAU ON HOW TO DEAL WITH HECKLERS ON PGA TOUR