Jordan Spieth admitted to Bryson DeChambeau that he has been a victim of heckling and abuse before on the PGA Tour. 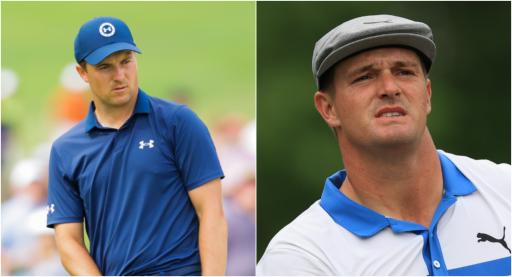 Jordan Spieth was in a group with Bryson DeChambeau when the big-hitting American was heckled during a round at the Memorial Tournament.

DeChambeau has had a recent feud with Brooks Koepka and the cheers of "Brooksy" towards the big-hitting American have now been heard on multiple occasions on the PGA Tour.

During an exchange between the pair on social media, Koepka sent a video to DeChambeau of a fan doing exactly that during a practice round at last month's PGA Championship.

After playing with DeChambeau at the Memorial Tournament last week, Spieth told reporters that he gave advice to the 27-year-old and revealed his own experiences of heckling.

"I've had people tell me I suck to my face for a long time, so I don't, you know, I mean, nothing, you just kind of zone everything out.

"He (DeChambeau) mentioned it to me at one point and I said, 'All anyone wants is a reaction and if you give it to them, it's going to get worse.' So it didn’t seem to bother him."

After his win at the Open Championship in 2017, Spieth's form fell off a cliff. In the 2019 and 2020 PGA Tour seasons, the Texan made a total of seven top-10 finishes which is in stark contrast to his previous form.

The three-time major winner has made a welcome return to form this season, winning the Valero Texas Open and finishing second at the Charles Schwab Challenge.

Interestingly, Spieth went into further detail about his experiences and revealed the player who has seen receive the most abuse on the PGA Tour.

"I feel like, as far as pairings go, I would say if you're paired with Patrick you hear some of the worst stuff, Reed, not Cantlay, from the crowd."

NEXT PAGE: RICKIE FOWLER GETS STUCK IN TRAFFIC BETWEEN ROUNDS AT US OPEN QUALIFIERS