J. J. Spaun won his first title on the PGA Tour at TPC San Antonio after sealing a two-shot victory from Matt Kuchar and Matt Jones. 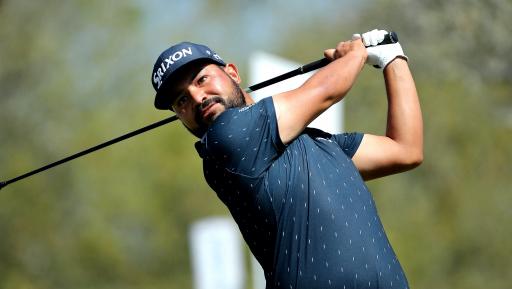 Spaun became the first player to overcome a double-bogey on the first hole of a final round at a PGA Tour event to win since Tiger Woods won the US Open in 2008.

The 31-year-old is also the ninth first-time winner on the tour in 2022 and he is the fourth player in the last five years to earn his first win at this event, pencilling his place at The Masters.

At the start of the day, Beau Hossler opened with a bogey on the 2nd hole but he bounced back with a birdie on the 3rd hole, a chip-in birdie on the 6th hole and an up-and-down birdie from the bunker on the 8th hole.

Looking for his first win on the PGA Tour, Hossler led by one shot heading into the back nine ahead of Spaun and two ahead of Dylan Frittelli and Troy Merritt.

Related: Tiger Woods posts OFFICIAL UPDATE on his decision to play in The Masters

However, Hossler made the second bogey of the final round on the 10th hole. Spaun may have double-bogeyed the 1st hole at TPC San Antonio, but he bounced back with three birdies in his next eight holes.

A birdie on the 11th hole gave Spaun the solo lead by one shot on 12-under-par. Merritt also birdied the 11th and 14th holes to get within one shot at this stage alongside Hossler on 11-under-par.

Matt Jones, who won the Shell Houston Open in 2014, rallied from five shots behind at the start of the day to contend. The Aussie made five birdies in his first eight holes to reach 10-under-par.

Despite making two bogeys on the back nine, he made his eighth birdie of the day on the par-4 17th hole to reach 11-under-par. Unfortunately for Jones, Spaun went two shots in front on 13-under-par after a calm birdie on the 14th hole.

Hossler dropped out of contention after a double-bogey on the par-5 14th hole. He hit his approach shot from the bunker and overshot the green, leading to a seven and falling back to 9-under-par.

PGA Tour veteran Matt Kuchar crept into contention on the back nine in Texas. With birdies on the 12th, 14th and 17th holes, he needed an eagle on the final hole to reach Spaun on 13-under-par.

The 43-year-old hit his second shot in the water stream and although he hit an errant tee shot on the 72nd hole, Spaun made a solid par to card a 69 and win by two shots from Jones and Kuchar.

Next Page: Tiger Woods PICTURED on driving range for The Masters at Augusta National