Ryan Palmer hit the shot of the week during the third round of the Valero Texas Open when he found himself amongst the trees with no line to the green. 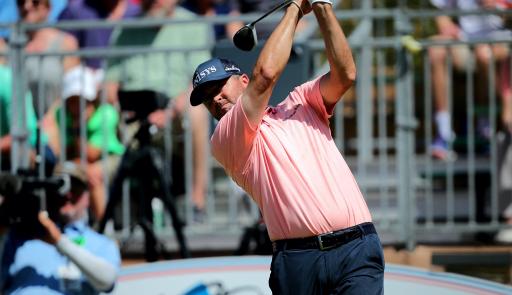 Ryan Palmer may have fallen down the leaderboard on Saturday at the Valero Texas Open, but he hit arguably the shot of the week from a large area of trees.

On the 11th hole, Palmer hooked his tee shot into the trees and although he only had 105 yards left to the pin, he was blocked by numerous trees and he couldn't see the green.

He took a swing into the dry, white grass and lofted his ball above the trees. His club even clipped the trees on his follow-through which shows how hard his shot was.

His ball landed in front of the pin and rolled just left of the cup to 12 feet. It was an incredible shot that not even Palmer could believe he pulled off.

Up and over and right at it

It was a shot reminiscent of the great escape shots we have seen from the likes of Phil Mickelson and Seve Ballesteros down the years.

As he walked to the green, the four-time PGA Tour winner fist-bumped a young fan. Unfortunately, Palmer could only make a par and this was the story of his day.

Palmer held the lead after 36 holes on 10-under-par at TPC San Antonio, but a 5-over-par 77 without any birdies pulled him back to 5-under-par and in 21st place with 18 holes left.

The 45-year-old hasn't won on the PGA Tour since the Zurich Classic of New Orleans in 2019 and he is yet to finish in the top 10 so far this season.

Next Page: Tiger Woods posts OFFICIAL UPDATE on decision to play at The Masters