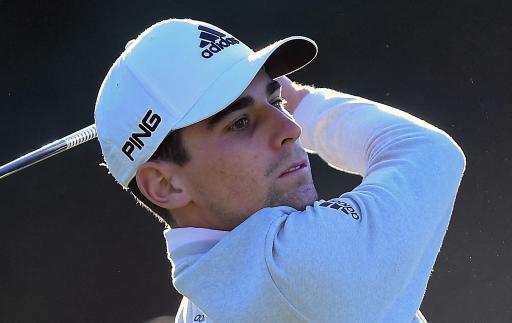 Chile's Joaquin Niemann has set a new 36-hole scoring record at Tiger Woods' Genesis Invitational on the PGA Tour following a second consecutive round of 8-under 63 on day two at Riviera.

But despite his brilliance on day two, Niemann only leads by two shots on 16-under par as America's Cameron Young went one better with an incredible round of 9-under 62 to vault up to 14-under par.

Justin Thomas surged in the trickier afternoon wave with a gutsy round of 64 to pull his way up to 11-under par, two shots ahead of Jordan Spieth (67) and Adam Scott (65) on 9-under par.

Sporting snazzy lightning pants, Viktor Hovland enjoyed an improved second round with a solid 64 as the Norweigian progressed to 7-under par alongside Scotland's Russell Knox (67) and Cameron Smith (68)

Further down the board, Rory McIlroy struggled to find any real momentum on Friday and stumbled to a round of 70 to lie well off the pace on 3-under par.

World No.1 Jon Rahm and in-form Patrick Cantlay both made the cut on level-par but at 16 shots off the pace will more than likely just be making up the numbers on the weekend.

Brooks Koepka and Dustin Johnson had a week to forget after missing the cut, as too did Thomas Pieters who likely has a sore foot after kicking his golf bag in frustration.

NEXT PAGE: TIGER WOODS REVEALS THE BIG MISTAKE ON HIS PGA TOUR DEBUT AT RIVIERA