Joel Dahmen invites Rory McIlroy to join him in the team Zurich Classic of New Orleans event on the PGA Tour - and the American even promises to keep his shirt on! 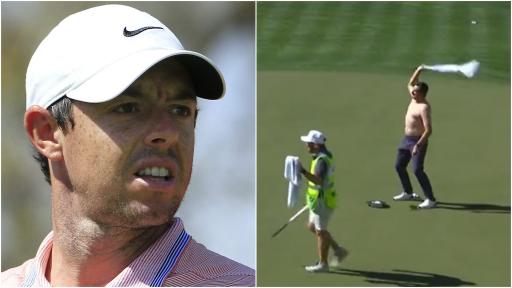 Fresh off causing absolute mayhem on Sunday evening at the Phoenix Open, pasty Dad bod Joel Dahmen has invited Rory McIlroy to join him in the Zurich Classic of New Orleans team event on the PGA Tour from April 21-24.

In case you've been asleep the past 24 hours, Dahmen and his playing partner Harry Higgs whipped up a storm on the 16th green in the final round of the WM Phoenix Open on Sunday.

RELATED: PAIGE SPIRANAC JOKES ABOUT HARRY HIGGS AFTER SEEING HIM TAKE HIS SHIRT OFF

What a crazy week @WMPhoenixOpen I can say that will never happen again so don’t even ask!!! Love you @Joel_Dahmen pic.twitter.com/qpq0wJipV8

Higgs buried an eight-footer for par and then put his shirt over his head in celebration.

The crowd loved it and went mad as they threw beer cans onto the green.

Dahmen then joined in and took his shirt full off and flung it over his head.

Higgs then ran across the green jumping up and down as the fans continued to hurl beer cans onto the course.

It was an absolute riot for the best part of 90 seconds, and it took a good bit of time for tournament officials to clear the bunkers and green up so that play could continue.

Fast forward 24 hours, and Dahmen is now looking for a partner to join him in the two-man team event on the PGA Tour in two months time.

McIlroy has never played in this tournament at TPC Louisiana before so it might not be one that is likely to fit into the Ulsterman's playing schedule this season.

It also fall two weeks after The Masters, so much will likely depend on McIlroy's commitments after the year's first major at Augusta National.

Either way, Dahmen has given McIlroy first dibs so let's see what happens.

If McIlroy doesn't accept, we are fairly certain Mr Higgs will join him. And let's be honest, I think we would all love to see a bit of that again.

NEXT PAGE: BRYSON DECHAMBEAU DENIES NO LAYING UP RUMOUR THAT HE'S NOT GOING TO PLAY ANYMORE PGA TOUR EVENTS