John Daly believes he would outdrive Bryson DeChambeau on the PGA Tour - had he not been using a balata golf ball. 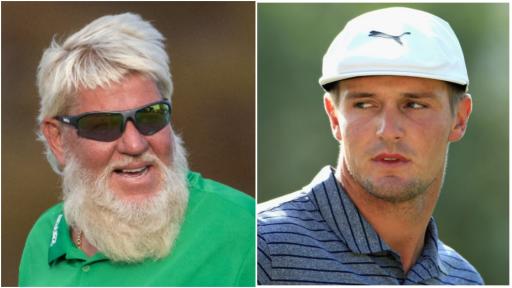 John Daly has fired shots at the PGA Tour's current longest hitter Bryson DeChambeau by claiming he would have easily outdriven him in his prime and not using a balata ball as he did in the 90s.

DeChambeau has led the PGA Tour driving distance for the past few years with an average of 320 yards off the tee - but as we all know, Bryson has sent a number of drives well over the 400-yard mark when required.

To put that into perspective 20 years ago, Daly led the PGA Tour in driving distance at just over 300 yards.

However, one of the main reasons balata was thought of as a "pro's ball" or "low handicapper's ball" back in the 90s was because its soft, balata cover cut so easily on mishits.

Balata balls were made using a naturally occurring rubber-like material. This soft coating was on the outside covering of the ball, and this allowed it to have higher spin on higher loft irons like wedges. While it had a higher spin rate, it also did not travel as far.

Amateurs may still find it tough to find fairways on a regular basis, but Daly considers the premium and more durable golf balls of today are much easier to hit straighter than they were in his day.

RELATED: JOHN DALY DISCUSSES HIS BEEF WITH TIGER WOODS AND WHAT HE TEXT AFTER CAR CRASH

Judging by his social and YouTube posts in recent weeks, DeChambeau, who finished sixth in the 2021 World Long Drive Championship, has been working even harder to increase his distance over the off-season.

As a result, DeChambeau has now pushed his ball speed up over the 220 mph mark for the first time in his career.

But while Daly is certainly impressed with what DeChambeau is doing with the driver as we head into 2022, the two-time major champion cannot help but feel golf is much easier than it was back in the 80s and 90s - as a result of no longer using a balata ball.

He also believes DeChambeau is still shy of where he was some 25 years ago... and that he was even hitting a 1-iron as far as Bryson hits his driver.

WATCH THE VIDEO BELOW - skip to 1:17 in the video to watch Daly's thoughts on Bryson and long driving

"I looked at the monitor at The Masters last year, and he [Bryson] was at 200/205mph ball speed or something, and I remember Nick Faldo was watching him, and I was like ‘Nick, I was at 220mph, man’ and that’s with the balata ball. I was carrying the ball 330/340mph with the balata ball... and that wasn't even with a driver" said Daly on the Full Send Podcast.

Daly added: "What Bryson is doing is phenomenal, but most tournaments I played in I hardly ever hit a driver.

"The golf ball is so easy [to hit] now, it's so straight. I mean, no disrespect to the guys out there today, Tiger [Woods] would agree.

"You put a balata ball in hands of Bryson..."

Daly was then asked by the podcast hosts as to whether he would outdrive DeChambeau had been using the golf balls they are using on the PGA Tour today when back in his prime.

"Oh by far I would... I'm the straightest long hitter that ever lived," said Daly.

"I don't brag but Tom Watson said that."