John Daly opens up on a comment that was made to him by Tiger Woods. 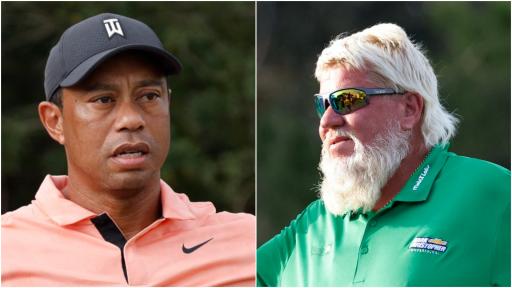 John Daly has admitted Tiger Woods apologised to him over dinner at the recent PNC Championship over a comment the former World No.1 made to 'The Wild Thing' at the 2019 US PGA Championship.

Daly, who was speaking on the Full Send Podcast, was asked for his thoughts when Woods questioned Daly's use of a golf cart during the tournament at Bethpage Black.

Woods was referring to when he played and won the 2008 US Open at Torrey Pines with an apparent broken leg.

Over to Daly for a response...

"Yeah, but he didn’t know the facts because the media, ‘the media’ (sarcastic gesture) didn’t tell him I had diabetes and I had a bad two knees and my hips out and all this stuff," Daly said on the podcast.

"He apologized to me at dinner the other night. I mean, he’s fine. I love Tiger."

RELATED: HAVE YOU NOTICED THE SUBTLE DIFFERENCES BETWEEN TIGER AND CHARLIE'S PUTTERS?!

WATCH: WE CAN'T STOP WATCHING THIS SUPER SLO-MO OF TIGER WOODS HITTING A FAIRWAY WOOD FROM 2013

Daly then also discussed how he was one of the first people to text Woods as he recovered from leg injuries sustained during his horror car crash in Los Angeles in February 2021.

He added: "Look, I was the only guy that texted him going through all this. Besides JT (Justin Thomas) and a couple of other players, when he had that wreck, I was the first one to say ‘Hey man, get better and do good.’

"And at the dinner, when I was Santa Claus, he says, ‘Man, thank you so much for the texts. It means a lot to me.’ And that meant a lot to me."

Daly teamed up with his son John Daly II to win the PNC Championship at Albany in the Bahamas two weeks ago, finishing two shots ahead of Woods and his son Charlie Woods.