Jon Rahm and his wife Kelley Cahill attended Arizona State Sun Devils against the USC Trojans and he took the US Open trophy as well. 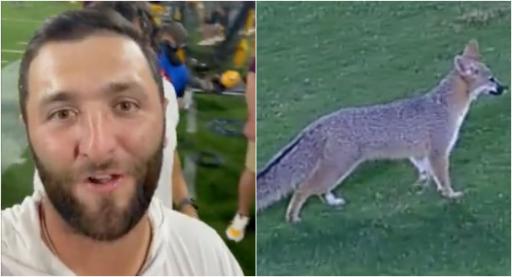 World No. 1 Jon Rahm is a proud member of the Arizona State University alumni and it was also where he and his wife Kelley Cahill first met.

Kelley was also a talented athlete during her student days. She competed as a javelin thrower and she was also a very good tennis player. Earlier in the year, they had their first child together, a boy named Kepa.

It was a very proud moment for Rahm and his wife to return to watch their old school play football and he took a special piece of silverware to the game with him.

A fox and a Rahm walk into a football game... @JonRahmpga and @CoachKelly50 checking in from Sun Devil Stadium. pic.twitter.com/VvdylWXVyI

The Spaniard won his first major championship at the US Open in June and he proudly paraded the event's trophy at the Sun Devil Stadium in front of the adoring crowd.

Arizona coach Herm Edwards would have been pleased with his side's success but they weren't prepared for an unexpected interruption that occurred during the match.

Bizarrely, a fox managed to get on to the pitch and the game was halted. Eventually, the fox was taken out of the stadium but as it has a den very near to the ground, it wouldn't surprise anyone if it returned.

"That fox has been in this place longer than any of these fans or coaches. He knows this place. I see him all the time," said Edwards.

Disruptions like this in the first quarter of the match are always entertaining for the crowd and it just so happened to occur at the match that Rahm and his wife attended.

The 26-year-old Rahm has only made one appearance on the new PGA Tour season at the Fortinet Championship, as well as fleeting visits to the European Tour in Spain.

Much like many other players such as Bryson DeChambeau, Rahm seems to be taking some away from tour off the back of the Ryder Cup. No doubt the six-time PGA Tour winner will be back on the fairways very soon.