Viktor Hovland becomes the first player to successfully defend his title at the World Wide Technology Championship at Mayakoba in Mexico. 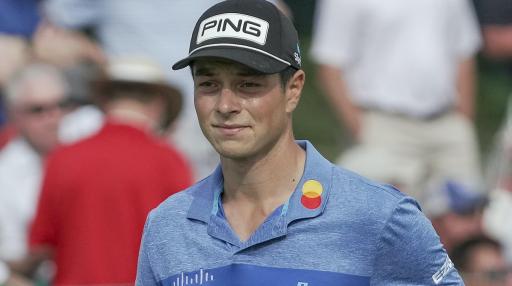 The 24-year-old finished on 23-under-par which sets the new record for the lowest winning score at El Camaleon Golf Club.

He has now won in each of the last three seasons on the PGA Tour and he has risen to number four in the FedEx Cup standings. He is the first player to successfully defend a PGA Tour title since Brooks Koepka at the 2019 PGA Championship.

Hovland finished four shots clear of the Mexican Carlos Ortiz and five shots clear of Justin Thomas. He was asked after winning if this was the best week of his career:

"I think I'll have to say so. I played really good golf throughout the week, I didn't have my best stuff today but I wish I could putt like I did today more often," said Hovland.

Another birdie for Viktor Hovland.

He leads by four with one to play. pic.twitter.com/6ZSIuXakIc

"It's been a blast all week - throughout the week I've been chipping it so good, making so many up-and-downs and it puts a lot of pressure off your long game.

"I hit a couple of bad chips today, it's still a work in progress but I've made big strides and I hope I can continue in that way."

Hovland began the final round with a commanding two-shot lead over Talor Gooch and he got off to a great start with three birdies in his first nine holes.

The young Norwegian thrilled the crowd with his birdie on the 9th hole and he led by four shots with just the back nine of the tournament to play.

Still yet to win on the PGA Tour, Scottie Scheffler rallied on the final day in Mexico by making five birdies in his opening nine holes. He reached 17-under-par at the turn.

Although Hovland made bogeys at the 12th and 15th holes, he made birdies at the 11th, 14th and then the 17th holes to stretch away from the field.

Home favourite Ortiz, who finished second at this event in 2019, made a charge without challenging on the back nine. After an uneventful front nine, he made five birdies in his final seven holes to shoot a 66. He finished in outright second place.

Hovland, with a four-shot advantage on the final hole, made a par to settle for a 4-under-par 67 and a record tournament total at Mayakoba.

NEXT PAGE: JON RAHM AND HIS WIFE ATTEND ARIZONA STATE COLLEGE GAME INTERRUPTED BY A FOX!