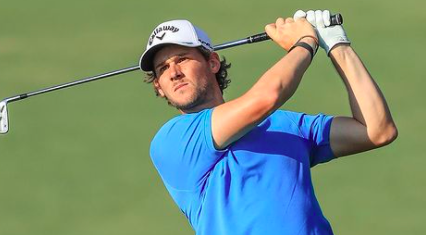 Pieters, who co-led after 54 holes with Frenchman Matthieu Pavon, made crucial birdies at the 12th and 17th holes on his back nine which gave him a two-shot cushion heading down the final hole.

The Belgian tucked away a fantastic long putt to finish on 19-under-par and to secure his fifth European Tour win and his first for two years.

"It feels amazing really," said an emotional Pieters after his round.

"It felt like a long time between victories. Adam and I worked so hard and it felt like I deserved a win, but it's never easy. Coming down the stretch I saw one of the Hojgaards, I don't know which one it was!

"He was up there again so I knew I needed a birdie on one of the last two holes and that putt on the last hole was fantastic."

Pieters and Pavon began the day on 16-under-par and despite the former European Ryder Cup player making a bogey on his first hole, he eagled the 5th hole to move on to 17-under-par, one behind Pavon.

Both players found a birdie at the par-5 8th hole but entering the back nine, they faced a challenge from Denmark in Nicolai Hojgaard and Lucas Bjerregaard.

This was bad timing for Pavon, looking for his first win on the European Tour. He made a catastrophic triple-bogey eight at the par-5 12th hole to fall back to 17-under-par, two behind Pieters who made a birdie at the same hole.

Fist pump and a timely birdie for @Thomas_Pieters at the 17th.

Hojgaard rallied, making more birdies at the 16th and 17th holes to reach 18-under-par and with two holes remaining, he tied with Pieters and Pavon in a tense finish in Vilamoura.

The sucker punch came from the talented Pieters who made a crucial birdie at the 17th hole, while Pavon and Hojgaard both made bogeys on the penultimate and final holes.

Pieters then holed a superb long putt for par on the 72nd hole to sign off with a win thanks to a 3-under-par 68.