World No. 1 Jon Rahm and World No. 5 Justin Thomas both shot 8-under-par to set the early pace at Liberty National. 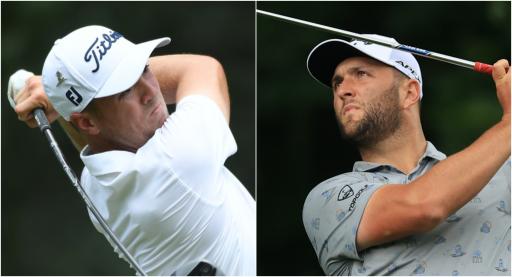 Jon Rahm and Justin Thomas fired scintillating scores of 8-under-par to race into the lead after the first round of the Northern Trust.

Rahm is playing at his first event since finishing tied third at The Open Championship and he got off to a fast start on Thursday with four birdies in his first eight holes.

The World No. 1 made three consecutive birdies on holes 15, 16 and 17 to finish with a score of 63. Rahm entered the tournament ranked fifth in the FedEx Cup standings, so he will fully expect to progress to the BMW Championship next week.

Thomas made the turn on 5-under-par and he could have posted 9-under-par, if it wasn't for a frustrating bogey at the par-4 15th hole. The 28-year-old has not made a top-10 finish on the PGA Tour since he won The Players Championship back in March.

Shot-for-shot at the top of the leaderboard. @JonRahmPGA gets to -8. pic.twitter.com/CPvi29gCAK

This is the second time this season that Rahm and Thomas have shared a lead after a round, with the first time coming after the second round of The Masters in November, 2020.

The pair lead by three shots from Harold Varner III who set the clubhouse lead on 5-under-par, making seven birdies and two bogeys on his way to a solid 66.

Bryson DeChambeau had an extraordinary round of level-par at Liberty National in which he only made two pars through 18 holes. The former US Open champion carded nine birdies, five bogeys and two double-bogeys to finish with a score of 71.

Dustin Johnson won the Northern Trust by an incredible 11 strokes last year on 30-under-par, but he opened up his account at the event in 2021 with a tame round of 1-under-par.