Rory McIlroy is bidding to become the first player to win three FedEx Cups this season and before teeing off at the Northern Trust on Thursday, he showed off some great ball skills. 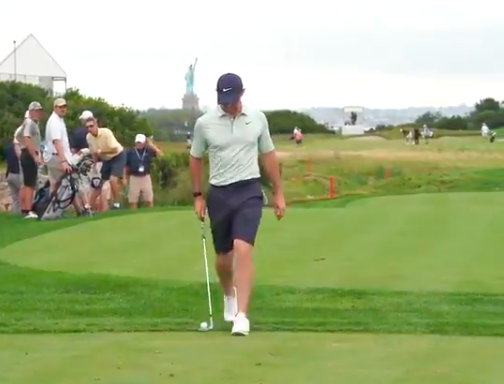 Rory McIlroy is an extremely gifted and talented golfer that has won four major championships and 19 PGA Tour events, he was clearly born to play golf.

Often when a golfer reaches this level of the game, apart from being able to score a ridiculous amount of birdies and under-par rounds, they are also able to produce some great trick shots and ball skills in their spare time.

McIlroy is no exception to this and during a practice round at Liberty National ahead of the Northern Trust, he showed off his superb ball juggling skills.

At one point in the footage that was tweeted by the PGA Tour, it looked as though the Northern Irishman had glue attached to his club as he somehow balanced his ball on both the clubface and the back of the clubface.

Some @McIlroyRory skills while the Statue of Liberty looks on. pic.twitter.com/di07NHlSpZ

Personally, I am only able to complete a couple of keepy-ups with my wedge before I drop the ball but it seems that McIlroy could keep the ball bouncing away from the ground for a very long time.

With the Statue of Liberty standing tall and proud in the background, the 32-year-old was looking calm and collected as he prepared for this week's Northern Trust.

He knows what is required to win the FedEx Cup, as he and Tiger Woods are the only players to have won it twice. Although McIlroy's form has been inconsistent this season, he is in great shape to become the first player to win three FedEx Cups.