Rahm hits the front after 36 holes at Muirfield Village 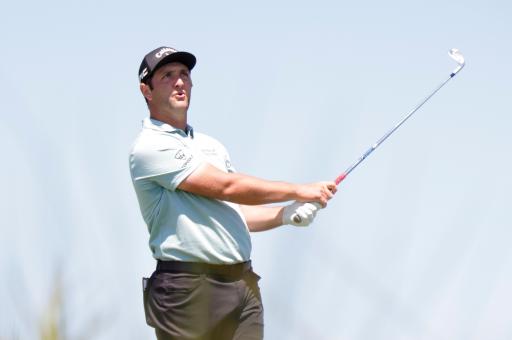 Defending champion Jon Rahm made a stunning hole-in-one on the par-3 16th to open up a two-shot lead after 36 holes at the Memorial Tournament.

Rahm, who won by three shots in this tournament at Muirfield Village last year, came back to finish his second round on Saturday morning after darkness suspended play on Friday.

The Spaniard returned to bogey the 14th but then bounced back with his incredible ace at the 16th before going on to birdie the 17th.

Rahm, who joined Callaway at the start of the year, used an 8-iron from 183 yards at the 16th.

“I feel like every hole in one is unexpected,” said Rahm. “But it was just one of those good numbers. I knew if I pulled the 8-iron it would be over the pin, so I just aimed between the pin and the edge of the bunker, hit a straight 8-iron and let the wind do the rest, and it went in.

“I did not think any ball landing short of the pin would go in just because it’s coming in with such height from the elevated tee and the greens are soft. But, hey, I mean, I think you can kind of see my face of surprise, right, early on, because I was pretty sure that ball was going to be past the hole about 15 feet.”

Rahm then parred the final hole to post a superb round of 7-under 65, vaulting him up to 10-under par and two shots clear of Patrick Cantlay, who won this event in 2019.

Scottie Scheffler, Collin Morikawa, Xander Schauffele and Max Homa are four shots off the pace on 6-under par.

Rickie Fowler continued his mini resurgence with a round of 70 to progress to 5-under par.

Further down the board, Justin Thomas is on 3-under par alongside Masters champion Hideki Matsuyama, while Jordan Spieth and Bryson DeChambeau have it all to do from 1-under par.

Rory McIlroy is another who will need to step on the gas over the final two rounds as the Northern Irishman finds himself on level par.

NEXT PAGE: JON RAHM USING A NEW PUTTER AT THE MEMORIAL TOURNAMENT