Koepka offers free beer to golf fans getting kicked out of the Memorial for saying 'Brooksy' to Bryson... 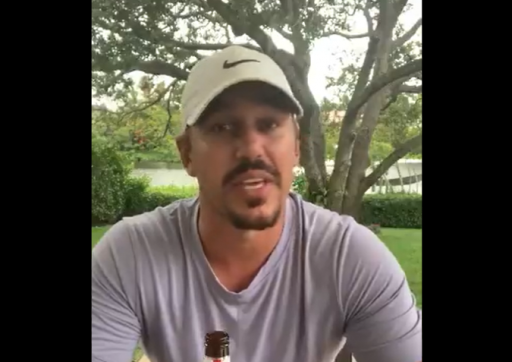 Brooks Koepka has taken to social media to poke yet more fun at Bryson DeChambeau by offering 50 cases of beer to golf fans who keep shouting his name at DeChambeau during the Memorial Tournament.

With Koepka at home and not playing in the tournament this week, DeChambeau was heard receiving a number of 'Let's go Brooksy' comments during his second round at Muirfield Village.

So much so, it led DeChambeau to alert security about what was happening, and reports claim a number of golf fans were escorted from the premises.

Koepka then release the following video to reward fans who were taunting DeChambeau.

"Thank you guys for the support. I heard a bunch of you were shouting my name at the golf tournament today."

Koepka then went on to tell fans to direct-message Michelob Ultra, which plans to give out 50 cases of beer.

A PGA Tour media representative confirmed "Bryson had an issue with some spectators and notified security, who dealt with them."

After his round on Friday, DeChambeau made it clear he found the comments "flattering".

"Oh, they weren’t taunts at all, it was flattering," said DeChambeau.

"I think it’s absolutely flattering what they’re doing. They can keep calling me that all day if they want to, I’ve got no issue with it.

"Most people think it’s a distraction, but I grew up learning how to deal with that stuff and I honestly thought it was flattering."

DeChambeau also confirmed he did not single out any spectators to be removed.

"The officers take care of that. I don’t really care," he said. "There’s obviously people going to say stuff at inappropriate times, but that’s different than what they’re saying. I don’t care."