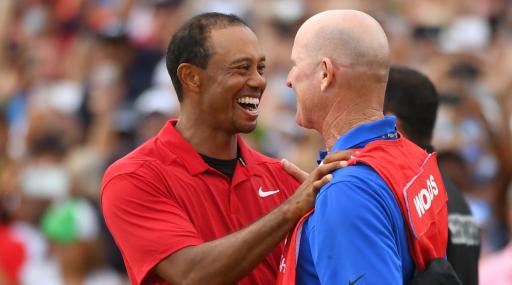 Tiger Woods' caddie Joe LaCava is heading back onto the golf course this week and he will be working for one of his former bosses in Fred Couples at the Principal Charity Classic on the Champions Tour.

LaCava was last seen caddying for Woods at the father-son PNC Championship at the end of 2020 when Tiger teamed up with his son Charlie for a tie for fifth.

That was the last time Woods teed it up in competitive action before his horror car crash in Los Angeles back in February.

While understandably excited to be back on the course and working for Hall of Famer Couples, whom he helped to win 12 times on the PGA Tour including the 1992 Masters, LaCava told Golfweek earlier this week that he would do anything to be alongside Woods in the PGA Tour's Memorial Tournament at Muirfield Village right now.

"Like nothing has changed 10 years later. Would kill to be working for TW in Columbus (Ohio at the Memorial Tournament0."

LaCava confirmed this won't be a permanent switch, it's just a stand-in job for the time being.

"Of course I miss it," he said. "Love Fred like a brother. Just subbing."

The former World No.1 recently spoke to the media for the first time since his car crash - READ HIS COMMENTS HERE