Jordan Spieth and Scottie Scheffler off to hot starts at Riviera, but they're all chasing Joaquin Niemann after 18 holes on the PGA Tour. 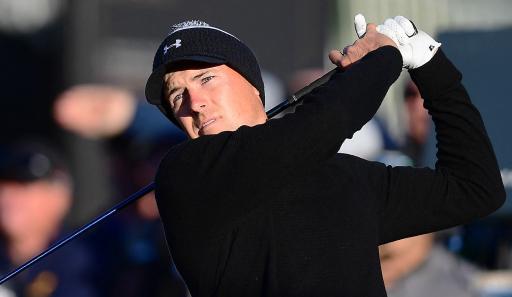 Jordan Spieth got off to a fast start in round one of the Genesis Invitational with a solid 5-under 66 but it is Chile's Joaquin Niemann that they are all chasing after 18 holes at Riviera.

Spieth has had an indifferent start this year on the PGA Tour with a solo second thrown in among a missed cut, tie for 60th and 21st in four starts, but the former World No.1 put it all together in round one at Riviera.

The three-time major champion started on the 10th and wasted little time out the gate with back-to-back birdies at 10 and 11.

Spieth then birdied the 13th, bogeyed the 14th and birdied the 15th to move to 3-under par for the round before adding another birdie at the par-5 17th to go out in 4-under par.

He two-putted for birdie at the easy par-5 1st and despite a birdie and bogey at 7 and 8 he saw out a steady 5-under 66.

Last week's maiden PGA Tour winner Scottie Scheffler played alongside Spieth and matched him stride for stride with the same score, one that was also matched by the defending champion Max Homa, who holed an incredible eagle putt at the 10th.

Jon Rahm, the pre-tournament favourite and World No.1, once again struggled on the greens but still managed to shoot a 2-under 69 to remain within touch of the leaders.

Rahm incredibly lost more than three strokes to the field in strokes-gained putting in round one, just as he did last week at TPC Scottsdale.

But the first round very much belonged to Niemann, who raced to the top of the board in the afternoon wave of groups.

But the talented 23-year-old has now given himself every chance of picking up a second career title following an exceptional 8-under 63.

He currently leads by 3. pic.twitter.com/0nT8HrQAZ2

The Chilean started on the 10th and he birdied the first two holes. He handed one back at the 12th but immediately got it back on the 13th before adding consecutive birdies at 16 and 17 to go out in 4-under par.

Niemann chipped close for a tap-in birdie at the par-5 1st and then struck three superb iron shots close at 4, 5 and 7 for birdies to race into solo possession of the lead on 8-under par.

Elsewhere, Justin Thomas, Cameron Smith and Collin Morikawa all remained in the hunt for the title with rounds of 4-under 67, while Rory McIlroy signed for a 2-under 69.

NOW WATCH: DUSTIN JOHNSON HAS A SHOCKER IN THE SAND AS GOLF FANS QUESTION WHETHER HE'S OFF TO THE SAUDI GOLF LEAGUE