Dustin Johnson has a SHOCKER in the sand: "Has he got somewhere else to be?"

Dustin Johnson turns into an amateur hack in the greenside bunker on the famous 10th hole at Riviera. 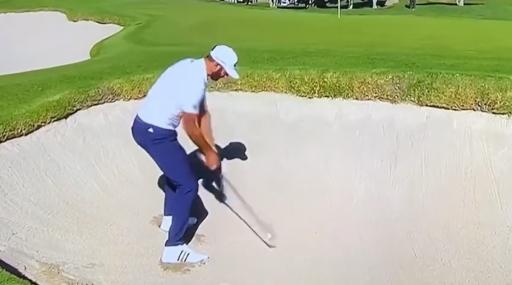 Dustin Johnson's rust was clear for all to see on day one of the Genesis Invitational as he back-handed a shot in the greenside bunker before going on to flub the next one in front of him.

Johnson, 37, holed a tramliner for birdie on the 9th but then found trouble with his tee shot down the driveable par-4 10th at Riviera.

Unfortunately Johnson's tee shot found the fairway bunker and he then sent his next shot into the greenside bunker where it plugged on the downslope.

After contemplating the shot in hand for about 10 seconds, Johnson got into the sand and immediately back-handed his ball with a left-handed stroke into the middle of the bunker.

He then wasted even less time on the next shot and flubbed it straight in front of him.

It was one of very few shots we see on the PGA Tour that we could all relate to.

Johnson then splashed out and holed the putt for a double-bogey six to fall back to 2-over par for the round.

Plenty of talk has been surrounding Johnson in recent weeks as speculation mounts that he is about to join a breakaway Saudi Golf League with the likes of Bryson DeChambeau and Phil Mickelson.

Johnson was recently quizzed about Ian Poulter being offered $30 million to join the Saudi Golf League, to which he replied: "I can't speak for Ian. Yeah, I'm sure they're - well, yeah, obviously they have or haven't, I'm not allowed to disclose. You'd have to ask Ian that one."

Pressed further whether he had been offered a similar offer, Johnson said with a smirk: "No, not similar. It's not similar."

Johnson, who seemed to enjoy one of the longest PGA Tour off-seasons of all time with his partner Paulina Gretzky, has played just twice on the PGA Tour in 2022. Oh, and he also favoured the Saudi International over Pebble Beach a couple of weeks ago.

The 24-time PGA Tour winner has now slipped from 1st to 6th in the world rankings over the last 12 months.

Golf fans could not help themselves on social media Thursday evening, especially after seeing DJ appear to rush his shots in the sand.

No Laying Up summed up what many fans were all thinking:

“We would never play this stupid little hole in the Saudi League!” - Dustin Johnson, probably pic.twitter.com/Vyx9cfi4OX

The big fish are bitin’ in the Red Sea! pic.twitter.com/GfLycNyMAA

Feel like the setup of the 10th doesn't do enough to protect the players.

NEXT PAGE: PHIL MICKELSON: SAUDIS ARE "SCARY MOTHERF***ERS, WE KNOW THEY KILLED KHASHOGGI"