Justin Thomas did not mix his words when responding to the views of Phil Mickelson, who is supposedly trying to use the threat of the Saudi golf league to improve the PGA Tour. 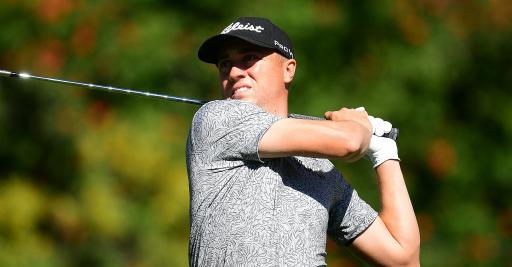 Justin Thomas has described Phil Mickelson's views on the Saudi golf league as an "egotistical statement" during the Genesis Invitational.

Speaking on the Saudi-backed concept that is dominating the golf world, Thomas admitted Mickelson has done "a lot of great things" for the tour, however it seems he is being tempted by the huge promised tournament purses.

The 2017 PGA champion was told of Lefty's comments after he shot 4-under-par in the first round of the Genesis Invitational, and much like Rory McIlroy, Thomas seems a strong supporter of the PGA Tour.

The key takeaways from Mickelson's interview with Alan Shipnuck were the 51-year-old using a lawyer to draw up the original Saudi golf league agreement and supposedly using this as leverage to improve the PGA Tour.

"Seems like a bit of a pretty, you know, egotistical statement," Thomas said.

RELATED: DUSTIN JOHNSON HAS A SHOCKER IN THE SAND: "HAS HE GOT SOMEWHERE ELSE TO BE?"

"I don't know. It's like he's done a lot of great things for the PGA Tour, (he’s) a big reason it is where it is. But for him and others that are very adamant about (exploring Saudi), if they're that passionate, go ahead. I don't think anybody's stopping them.

"I've heard way too much talk about a lot of players that are so done with everything, but they keep hanging around, so clearly they're not too done.

"I’ve never really gone down that road. I have a lot of things I'm focused on accomplishing out here and I'll be the first to say that, yeah, there are plenty of things that I would love to see improve with the PGA Tour. But that's a part of the process, you know?

"All you want to do is better the product and one by one, if we can improve this here, this there and keep getting better, then everybody wins.

"I'm very, very content with what's going on. I mean, the reason I play golf is to create a legacy and win as many times as I can on the PGA Tour.

"So that's why I would like to say I've had the distraction and that's maybe why I've played poorly the last year, but that, unfortunately, was not the reason why."

World No. 1 Jon Rahm has also pledged his allegiance to the PGA Tour and he echoes Thomas' thoughts on creating a legacy.

The 28-year-old, looking for his 15th tour win this week, described Rahm's opinion as "extremely well said" on Twitter.

There seems to be a promising core of players who are opposing the Saudi golf league which will be funded by LIV Golf Investments, led by Greg Norman, and the Public Investment Fund which represents the Saudi Arabian Government.