Leona Maguire emphatically won the LPGA Drive On Championship in Florida to become the first woman from Ireland to win on the LPGA Tour. 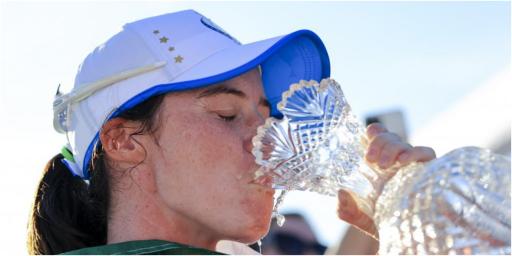 Leona Maguire became the first Irish woman to win on the LPGA Tour with a three-stroke victory at the Drive On Championship.

Maguire, 27, shocked the golf world when she was the standout performer for Catriona Matthew's blistering Solheim Cup side.

It led to speculation about how it was a matter of when - not if - she would claim her first victory on the LPGA Tour. A major title now beckons.

In the end, the margin of victory was by three strokes over her nearest competitor Lexi Thompson who finished at 15-under par.

Maguire had started her week with a 6-under par 66 and later said she had no idea of how well she was performing.

Then, on Friday, she signed for one better with a 7-under 65 to share the lead going into the final round in Florida.

At the 16th, she made birdie to stretch her lead and have some comfort. By that point she had made seven birdies and one bogey.

By the 18th, she had an enjoyable 489 yard walk to soak up that winning feeling wearing her now tradtional sunglasses.

She piped her drive down the middle of the fairway at the par-5 then laid up at Crown Colony Golf & Country Club.

Maguire had the cushion and couldn't get up and down to save par. But that did not matter one bit.

She tapped in for bogey and then embraced her caddie. The Guiness will be flowing in Ireland after this one.

Maguire did everything but win her 2021 season. She had two runner up finishes and three other top-10s in her rookie season.

An emotional Maguire said: "It's a bit surreal, it's been 17 years in the making and you kind of wonder if it's ever going to happen."

She added that it's "more relief" than anything and she "finally got there in the end".

"It's huge for Irish golf," she said, suggesting she hoped there were little girls watching back home as she wiped away a few tears.

Lydia Ko and Danielle Kang have already won on the LPGA Tour this season. Nelly Korda finished inside the top 20 in Florida.

Maguire was inspirational in Team Europe's 15-13 victory over the United States in the Solheim Cup. She received a hero's welcome in Ireland.

She was also the first Irish woman to be selected for the side. By the end of the week, she had gone undefeated and claimed four-and-a-half points.

It led to the United States' then captain Pat Hurst telling the media that she was "one we are going to have to fear for a long time".

That was only the second time the Europeans had won in the United States. The veterans of the team were leaning on the rookie.

From County Cavan in Ireland to the big time. Maguire has well and truly arrived.

Who knows what kind of party she will receive when she returns home with the trophy.

Next page: Bryson DeChambeau says injury not from speed training