Jordan Spieth has explained in full what was going through his mind at Pebble Beach when he hit a shot facing a 65ft drop. 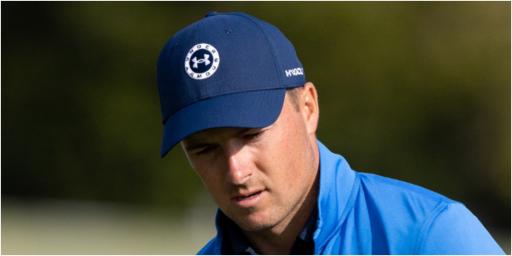 Jordan Spieth has explained his caddie tried to talk him out of playing his now infamous cliff shot three times at Pebble Beach.

Spieth sent the golf world into a bit of a frenzy during his third round at the AT&T Pro-Am on the eighth hole in California.

WATCH: HORRIFYING CBS GRAPHIC SHOWS HOW FAR JORDAN SPIETH "WOULD HAVE TUMBLED TO HIS DEATH"

His tee shot motored towards the edge of the cliff and was fortunate enough to stay in bounds, leaving an awkward situation.

Spieth decided to play the shot anyway despite being faced with a 65ft drop and later told how he felt a bit of anxiety after hitting the shot.

He also suggested that had his caddie Michael Greller stepped over the hazard line he wouldn't have let his player hit the shot.

Going forward, the 28-year-old said should a similar situation arise then Greller would just throw his ball in the water to prevent the shot.

Spieth also said how seeing the overhead picture taken from a blimp as he stood on the edge of the cliff caused some anxiety.

That anxiety was how he was going to explain the shot to his parents and wife Annie Verret.

"Well, I meant to just kind of float a fade (with his tee shot) and I just missiled one. So I was asking the cameraman behind if it went into the water and the marshal said it went in the hazard. The cameraman said it's maybe playable but it's past the hazard line and I know obviously what that means.

"I didn't realize the severity until I got up to it. As I walked up to it I felt myself like I was walking and then I started walking like this (indicating), you know like falling back walking, just to get to the edge.

"And then it was like -- it's so weird because if you can normally see the ball, like I never had a situation where you can see a ball, get a swing on it, but you're not going to play it.

"So it was just kind of weird because it was like, 'Well if I can get a swing on it and I can hit it then why would I take a drop?'

"Like just whenever, you're never over, I guess I saw a 65-foot cliff. So it's an unusual situation, normally if you're walking into a hazard, you see a ball, you hit it out."

Spieth's caddie didn't walk over the hazard line to see for himself what the situation was truly like.

"Michael hated it. He tried to talk me out of it three times. I don't blame him, looking back. I'm just glad I made the par to make it worth it, because I don't think I would have made par with a drop, but if I made bogey it would have really not been worth it.

"But yeah, I mean it was, I was more like, it was more of a nervous and adrenaline hitting it and then when I got to the green as I was walking there it was more of like an anxiety feeling afterwards, luckily it wasn't before. But, yeah, I mean if I had, I think I'll hit less club tomorrow.

"I mean, footing was solid, but I didn't have much room past where my left foot was and the problem was it's down sloped. Like if it was flat it's no issue at all.

"So those are ones -- I was almost sitting there going is it worth it because, yes, I can get a strike on it, but am I going to back up out of fear and just kind of thin this in the water, you know, like kind of top it.

"And clearly the -- if I felt like I was in real true danger of losing my life I would have pulled the ball back and dropped it. It wasn't quite that severe. But it was enough to where I certainly couldn't put a normal swing or shot on it."

Even on course commentator and former PGA Tour player Colt Knost seemed unnerved by what was unfolding.

"And, I mean, I don't know, just thinking about it now it's like kind of hard, it's weird. It's like, because there's a story of the guys that drove off that cliff so, when they used to allow carts here. So I, I was thinking about that obviously walking up.

"So, not worth it, to be honest, but I guess I just, it was a weird situation. It was like, well, if I can hit it

"And I was -- he said that next, if that were to happen again he'll walk up, grab my ball and throw it in the water, so that I can't hit it. He said, I should have done that. He was like, I just didn't know what to do myself.

Spieth also explained his wife Annie and their son Sammie was also in attendance at Pebble Beach, along with his parents.

Here's how he responded when asked about how he would explain the shot to her:

"I'm not really sure what's going to happen there. I just saw the blimp shot from overhead and it really bothered me. So I can't imagine while she was watching that live.

"They actually came out, my son was out for the first time ever on three and four and I don't know where they went from there. And I don't know if they were over off the AT&T hospitality or anything.