Jordan Spieth is now AHEAD of Rory McIlroy in the World Golf Rankings!

Jordan Spieth moves ahead of Rory McIlroy in the OWGR for the first time in THREE YEARS! 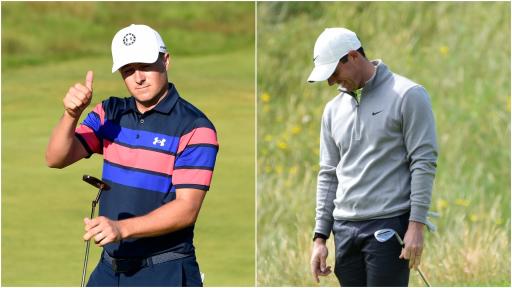 Jordan Spieth has now moved ahead of Rory McIlroy in the Official World Golf Rankings for the first time in exactly three years following his solo runner-up finish at The Open Championship at Royal St George's.

Spieth, who returned to the winner's circle for the first time in just shy of four years with victory at the Texas Open in April, has enjoyed a resurgent run of form of in 2021 and has vaulted from just inside the world's top 100 to a current 14th position.

The three-time major champion's solo second in golf's final major of the year on Sunday pushed him nine spots in the rankings - marking the first time he has found himself in the world's top 20 since January 2019.

McIlroy, on the other hand, despite also lifting silverware again at the Wells Fargo Championship in May, is going the other way.

The Ulsterman was fourth in the standings at the end of 2020, and he's now slipped outside of Spieth in 15th spot following his disappointing tie for 46th at The Open

It marks the first time since July 15, 2018, that Spieth is ahead of McIlroy in the Official World Golf Rankings when the American was sixth against the Northern Irishman's eighth.

McIlroy's recent dip in form, which was seen him pick up just one top-10 finish in six starts since his return to the winner's circle at Quail Hollow, means at 15th in the world he is now stuck in his worst world ranking position since he was 17th in November 2009.

FEATURE: DOES RORY MCILROY NEED A BREAK FROM THE GAME?

"I made too many mistakes," said McIlroy after finishing level-par for 72 holes at Royal St George's, and 15 shots behind Open champion Collin Morikawa.

"I need to do a better job of just maybe being a little bit more disciplined out there."

At the top of the world rankings, Jon Rahm moves back in front of Dustin Johnson in their topsy-turvy battle that sees separated by the smallest of margins, while Morikawa moves to a career-best third after landing his second career major in less than 12 months.

When it comes to the ongoing Brooks-Bryson battle, DeChambeau lies in sixth with Koepka one back in seventh.