The content was captured in February, the day before Tiger had his unfortunate car accident, from which he is still recovering. 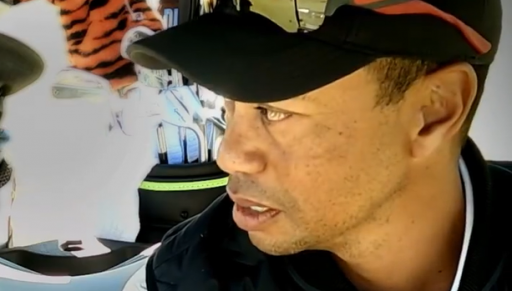 Discovery’s GOLFTV is today debuting 'A Round with Tiger: Celebrity Playing Lessons', an exclusive four-episode series starring global sporting icon Tiger Woods that unveils a different side of one of the greatest athletes to ever live.

The Peter Berg-directed series shows a relaxed Tiger engaging with his celebrity friends and sharing their perspectives on life, fatherhood and golf.

The content was captured in February, the day before Tiger had his unfortunate car accident, from which he is still recovering. With this knowledge, the deep and poignant conversations will undoubtedly resonate even more strongly with viewers.

The series is being released with the full blessing of Tiger and his guests. Discovery and GOLFTV thank everyone for their involvement and wish Tiger a continued speedy recovery.

The three guests in the series include actress and talk show host Jada Pinkett Smith, 13-time NBA All Star Dwyane Wade, and actor and comedian David Spade, with a fourth and final episode featuring behind-the-scenes clips and outtakes from the filming.

Tiger’s guests for this series have all reached the pinnacle of success in their own fields, and their interactions with their host help showcase a different side of the 15-time major champion.

"Shooting this series was some of the most fun I’ve ever had filming on the golf course," said Woods.

"Each guest brought a unique perspective on life, both professionally and personally. I’m always inspired by others who are considered the best at what they do and learning about how they made it to the top. I was pleasantly surprised by Jada and David’s golf games, and Dwyane, who just picked up the game, made a lot of progress in the time we spent together.

"Each episode provides something that everyone can enjoy and learn from, so I’m happy to share these lessons and conversations with the world."

New episodes of A Round with Tiger: Celebrity Playing Lessons are set to be released weekly, with Tiger being joined by a new guest in each of the first three weeks and the series concluding with a Behind-The-Scenes episode. More details on each episode can be found below:

Episode 1 - July 20: Jada Pinkett Smith: A heartfelt episode with deep conversations, Jada and Tiger share personal stories in addition to instructional tips only Tiger can provide. Jada also shares how inspirational it was to see Tiger win the 2019 Masters, and how she took up golf because of that victory.

Episode 2 - July 27: Dwyane Wade: A transformative episode for Wade’s (not so stellar!) golf game, he and Tiger bond quickly over their similarities as elite athletes, while Tiger straightens out Dwyane’s swing.

Episode 3 - August 3: David Spade: One-liner central, David and Tiger have great banter throughout the episode. In addition to being entertained, viewers may be surprised and impressed with David’s strong golf game.

Episode 4 - August 10: Behind the Scenes: A compilation of the best candid and behind-the-curtain scenes from the series, from the moment one of the celebs hits a rooftop and nearly takes out a crew member, to Peter Berg holding court in between sets.

"It is always a privilege for our team to work with Tiger and we’re excited to have these special guests come together to create this unique series, which so perfectly blends golf and life," said Chris Reynolds, General Manager, GOLFTV.

"The teams at Discovery and GOLFTV have built such a close relationship with Tiger over the years, and this resulted in some of the most enlightening, engaging content we’ve ever shot.

"We thank Tiger for allowing us to move forward in producing this series even after his accident and wish him a continued speedy recovery."

Fans around the world (excluding the US) can enjoy A Round with Tiger: Celebrity Lessons exclusively on GOLFTV. Fans in selected European markets will also be able to watch the series on Discovery+ from July 29.