Editor's Column: "Believe the hype, Morikawa is a man for the majors"

GolfMagic's Head of Content Andy Roberts is tipping Collin Morikawa to go on and achieve the Career Grand Slam... 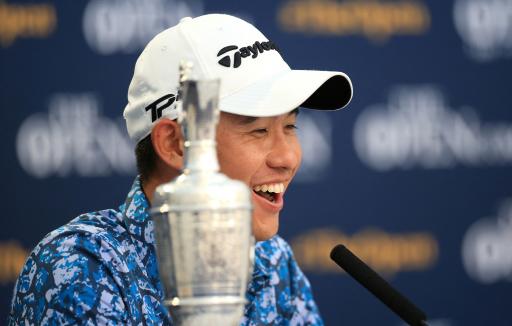 We might all be living in a world full of uncertainty right now, but one thing I can just about guarantee is Collin Morikawa one day joining Gene Sarazen, Ben Hogan, Gary Player, Jack Nicklaus and Tiger Woods in golf's Career Grand Slam Club.

As tough as the past 15 months have been and continue to be for so many of us with the global pandemic, golf has thankfully remained a constant for us and given us all something to focus on and enjoy both from a recreational perspective and watching the world's best players on television.

New players have pleasingly taken up the sport and tee times are full to the brim, while Brooks and Bryson have started panto season early and new superstars have emerged on the scene. None of them bigger than Mr Morikawa.

If you thought Morikawa's debut major win at the US PGA Championship last August was some sort of fluke, you would have been left to swallow a bitter pill when the 24-year-old did the exact same thing at The Open Championship at Royal St George's on Sunday.

Morikawa carded a flawless final-round 66, finding fairways with regularity and holing putts from just about everywhere, to see out a two-shot victory over compatriot Jordan Spieth on 15-under par.

Believe the hype, Morikawa is no flash in the pan.

Morikawa now becomes just the second player after his childhood hero Tiger Woods to win The Open and US PGA before the age of 25, as well as the fourth American to win The Open before the same age. That is something only Woods, Spieth and Bobby Jones had previously achieved.

The newly-promoted World No.3 also becomes the first golfer to win two different major championships on debut, and the first player since Jones in 1926 to win two majors in eight or fewer starts. That's not all.

Morikawa is now the 10th player in the history of the famous Open Championship to win on debut and the first since compatriot Ben Curtis in 2003, incidentally on the same links.

He also becomes the youngest player to win The Open when trailing prior to the final round since a 22-year-old Seve Ballesteros in 1979.

Another stat that I really admire is the fact Morikawa is the only player in the last 25 years to win multiple majors with bogey-free final rounds.

I mean, that is just clutch.

While Morikawa's immediate major rise has taken me by something of a surprise, especially when I consider the strength in depth of the world's best players right now, I was told little more than two years ago by those in the know that this kid was going places and fast.

I remember it well in fact. I had a meeting with TaylorMade at their HQ and they were briefing me ahead of their latest club launch, along with updating me on their player roster.

As the names were being read out, I nodded politely to each. Then out came Morikawa.

"Sorry, I don't know much about him."

"Oh, you will soon, don't worry. A ball-striking machine with a reliable fade."

He made his PGA Tour debut at the Canadian Open finishing tied 14th, and then took things up a notch with a tie for second at the 3M Open and tied fourth at the John Deere Classic to rubberstamp his PGA Tour membership for the next season.

Officially signed by TaylorMade, Morikawa became a PGA Tour winner at the Barracuda Championship following a three-point victory over Troy Merritt in the sole Stableford tournament of the season where he birdied the final three holes to see out the win.

"I think the gates are open," said Morikawa. "I've been knocking on the door the past month or so, and the game's been feeling good."

When golf was hit by the pandemic and forced into a mini suspension of the circuit, Morikawa returned with a heartbreaking playoff loss to Daniel Berger when missing a short putt in sudden death.

Only that near miss seemed to ignite him.

After recording the second-longest streak to start a professional career on the PGA Tour (22 vs the 25 set by Woods), Morikawa then took down Justin Thomas in a playoff to win the Workday Charity Open at Muirfield Village.

He then won the US PGA Championship at TPC Harding Park for his first major title, hitting arguably the greatest shot ever seen in PGA history when driving the green at the 16th hole to set up an eagle that he duly converted to take the Wanamaker Trophy.

Morikawa added another big victory earlier this year with a three-shot triumph at the WGC-Workday Championship, and then etched his name on the Claret Jug for a second career major at The Open on Sunday evening.

Forget about opening a gate, Collin. Where do you want the red carpet?

Golf is hard to predict at the best of times, and nothing can ever be certain when it comes to tipping an American poster boy for future success in the majors. Just ask Rickie Fowler.

Tickets to the Grand Slam Club are even tougher to find. I mean seven years ago, most of us would have assumed Rory McIlroy would have a Green Jacket in the cupboard by now. Some of us are still baffled as to how Phil Mickelson has missed out on a US Open.

Surely Spieth will lift the Wanamaker one day? Brooksy and Dustin will surely pick off two more majors each? Rahm has what it take to add the other three?

While I am confident several of those above storylines will happen when all is said and done, I am most confident about Morikawa going on to win The Masters and US Open to become just the sixth player to join golf's most elite club.

Believe the hype, Morikawa is a man for the majors.