Jordan Spieth endured something of a rollercoaster week at the Northern Trust on the PGA Tour. 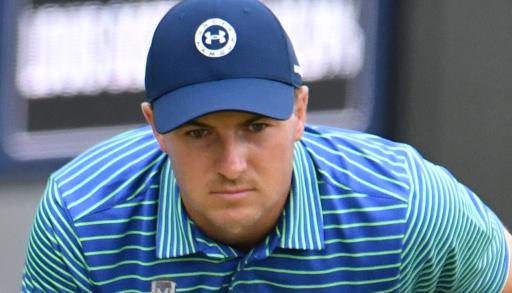 Master PGA Tour stat man Justin Ray confirms that Spieth now becomes the first player on the PGA Tour in the past 20 seasons to make consecutive eagles and consecutive triples or worse in the same tournament.

Spieth is the only player in the last 20 seasons to make consecutive eagles and consecutive triples/worse in the same PGA Tour event.

Spieth opened the week with a round of 72 and then vaulted into contention for a second title of the season with a stunning 9-under 62 on Friday, but unfortunately could not build on that on Saturday with another 72.

Things sadly got even worse for Spieth in Monday's final-round finish as the three-time major champion closed with a disastrous 8-over 79 - featuring back-to-back triple bogeys on the 9th and 10th - to finish 1-over par for the week and third last in 73rd place.

RELATED: RAGING RORY MCILROY THROWS HIS 3-WOOD INTO THE TREES AT THE NORTHERN TRUST!

Despite his disappointing week at Liberty National, Spieth remains in the hunt for a second FedEx Cup, which he first won in 2015, as he lies seventh in the standings heading into this week's 70-man BMW Championship.

The top 30 in the standings following play this week will head into the season finale for the FedEx Cup at the Tour Championship at East Lake the following week.

Spieth will need a strong week on the PGA Tour this week if he is to play his way into one of the six automatic spots in the US Ryder Cup side as he currently looks on from eighth in the list.

NEXT PAGE: PATRICK REED IS RECOVERING IN HOSPITAL