Rory McIlroy loses his cool and THROWS his 3-wood into the TREES!

Rory McIlroy comes clean about his tantrum at the Northern Trust. 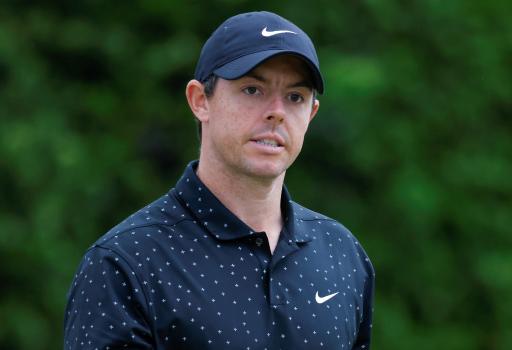 Rory McIlroy has revealed how he lost his cool and threw his 3-wood into the trees on the 9th hole in Monday's final round of the Northern Trust at Liberty National.

McIlroy had just bogeyed the 8th hole and he then sprayed his tee shot down the 9th into trouble which led to him hurling his TaylorMade SIM2 Max 3-wood into some woodland.

"So, I needed to try to get into a new 3-wood, because I threw my 3-wood onto the New Jersey Turnpike off the ninth hole on Monday, and so I was without a 3-wood coming here," McIlroy told the media ahead of this week's BMW Championship.

"I might not have reached the road but I threw it into the trees off the 9th tee at Liberty National, so if someone wants to go get a 3-wood, there's one in there somewhere!"

RELATED: RORY MCILROY OUT OF THE WORLD'S TOP 15 FOR THE FIRST TIME IN NEARLY 12 YEARS

McIlroy closed with a round of 70 to finish tied 43rd and 13 shots off the pace as he slumped to 16th in the world rankings, which marks his worst position since November 2009.

The former World No.1 finds himself in 28th place heading into this week's second Playoffs Series event at Caves Valley Golf Club, where he must remain in the top 30 on Sunday in order to play his way into next week's Tour Championship to contend for a record third FedEx Cup title.

McIlroy, is however, feeling particularly jaded and admits he cannot wait for a couple of weeks off ahead of the Ryder Cup next month.

"I think having two weeks off after the Tour Championship is going to be nice," said McIlroy.

"I was planning to go over to Wentworth to play the BMW PGA, but it's just too much travel.

Mcllroy added: "I think I feel like a lot of guys feel right now, a little jaded, a little tired. End of the season, there's been a lot of golf, so a lot of travel.

"So I'm just sort of getting through it, to be honest. I'm going day by day and just trying to get through it as best I can and try to make it to next week. After that, two weeks off before the Ryder Cup.

"I'm just taking it day by day. The game feels pretty good, energy levels are sort of trying to dig deep at this point, but yeah, try and keep going and try and put in a good finish this week to make sure I'm in Atlanta next week."

NEXT PAGE: IS IT TIME TO DOCK TOUR PROS SHOTS FOR STROPS?