Tony Finau: What's in the bag of the Northern Trust winner?

Tony Finau finally secured the second PGA Tour title of his career at the Northern Trust after he beat Cameron Smith in a playoff. 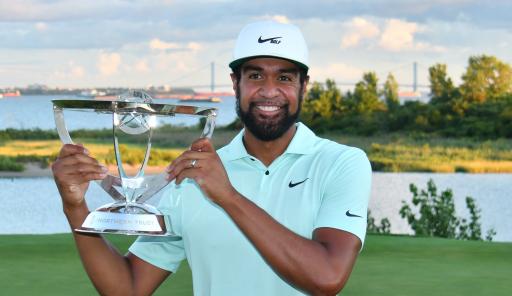 Not only has Tony Finau proven that he can win again on the PGA Tour, but he can also win at big events during the business end of the season at the FedEx Cup Playoffs.

It had been 142 PGA Tour events and 1,975 days since his only win at the 2016 Puerto Rico Open at Coco Beach, but a round of 6-under-par on Monday afternoon helped him to victory.

The popular American earned 2000 FedEx Cup points which has propelled him to number one in the FedEx Cup standings, having started the week in 23rd place.

Finau came into his own on the back nine at Liberty National. The 31-year-old made a birdie on the 12th hole, a fantastic eagle on the 13th hole and another birdie on the 14th hole to climb into contention.

Smith followed suit on the back nine at Liberty National, he made four birdies in his last seven holes to recover from a bad start and post 20-under-par with Finau.

Finau and Smith returned to the 18th hole for the playoff, but Smith gifted his opponent the win by slicing his tee shot out-of-bounds. Finau made a solid par to secure the Northern Trust title.