Jordan Spieth: "A win is around the corner on the PGA Tour"

Jordan Spieth's return to form comes at the best possible time with The Masters less than two months away... 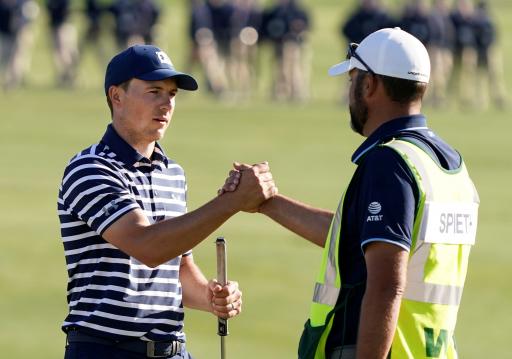 When Jordan Spieth missed the cut at the Farmers Insurance Open three weeks ago, Jordan Spieth plummeted to 92nd in the world rankings. It marked his lowest ranking since 2013, a fourth missed cut on the PGA Tour this season, and a wounded soul.

Fast forward to this week's Genesis Invitational, and the three-time major champion finally arrives at Riviera with his mojo back after back-to-back top-five finishes at the Waste Management Phoenix Open and AT&T Pebble Beach Pro-Am.

Spieth may go down as the first player since Daniel Summerhays in 2013 to hold two consecutive 54-hole leads in PGA Tour events and fail to win either of them, but while clearly disappointed not to be slamming shut some much-needed silverware into his trophy cabinet, recent performances give plenty of reasons for encouragement.

While the driver certainly needs some extra work as we build up to The Masters in April, a tournament Spieth won in 2015 and threw away to Danny Willett in 2016, the rest of Spieth's game looks vastly improved, especially his approach play.

This was reflected none better than holing out twice for eagle at Pebble Beach last week. It finally felt like the Spieth of old.

WATCH: SPIETH HOLES OUT FOR EAGLE FOR A SECOND TIME IN THREE DAYS!

The question on everyone's lips right now is whether the real Jordan Spieth is back on the PGA Tour? We argued that during our latest Tour Chat video, which you can watch above.

I mean it's great to see Jordan contending for titles again, but come on let's be honest, the real Spieth was a player that was entering the record books with three majors by the age of 23 and the sky was very much the limit.

There is still a very long way to go until we can truly say the now 27-year-old American is back to anywhere near his World No.1 best. He has still got 61 rungs of the ladder to climb to get back there.

Yes by all means, let's get excited for Spieth's likely return to the winner's enclosure in the near future, but also remember he has plenty of hurdles standing his way to get there.

In 2017, Spieth emphatically won the Open Championship at Royal Birkdale and overcame Matt Kuchar to win his third major title.

That was a typical Spieth victory that left us with a parting memory of draining a monster eagle putt on the 15th, before pointing at his caddie to pick the ball out the cup. Not rudeness, just arrogance... and we loved every second of it.

It was an adrenaline-fueled moment and one that will go down as one of the most iconic moments in Open history.

But this is Spieth - a man for the big moment. You expect him to do the unthinkable.

Cast your mind back through Spieth's 11 PGA Tour titles and you'll probably recall at least one freakish hole-out from out of nowhere in each of those wins.

Tiger Woods did it. Phil Mickelson too. It's what great players and legends of the game do.

Spieth's Open victory in 2017, the last of his three major titles, capped off a year in which he racked up three PGA Tour titles and 12 top-10 finishes.

But then the dip happened, and badly.

When you delve deeper into the stats of Spieth's game in recent years, it's no real surprise to see why his performances have been so poor.

Spieth's driving accuracy has taken a dramatic dive too, an area of the game that golf analyst Brandel Chamblee holds most concern for him.

Four years ago, Spieth sat 44th in strokes gained off the tee. Now he lies 207th, meaning he has hit less than half of his fairways so far this year.

Not that Spieth will need reminding about his lacklustre 2020 campaign, but he finished in the top 25 on just four occasions - alien stats to a player accustomed to finding himself at the top of a leaderboard.

Fast forward to 2021, and while Spieth has only managed one top-10 finish in his last eight major championship appearances, the last two performances on the PGA Tour have given us reason for hope with a tie for fourth at TPC Scottsdale and tie for third at Pebble Beach.

It's also the first time that Spieth has managed consecutive top-10 finishes on the PGA Tour since May 2019.

The game is trending, the confidence is rising, and The Masters is some seven weeks away.

Sorry, I'm getting ahead of myself now.

One consistent quality of Spieth's game is his putting. He is still to this present day one of the best putters in the world.

Even during his bad form, Spieth has remained in the top 10 of the overall putting averages since the 2019 PGA Tour season.

That takes some doing, especially when the rest of your game is seemingly in decline.

After last week's event in which Daniel Berger took the victory, Spieth said he is feeling as confident as he has done for a long time.

That's an ominous sign for his PGA Tour peers and that a win is around the corner.

A self-assured Spieth is a dangerous Spieth, and we can't wait to see more of the same at this week's Genesis Invitational at Riviera, a golf course that he has already made clear is one of his favourites on the circuit.

Perusing the calendar, you can't help but feel Spieth is timing his run to perfection for an assault on a second Masters title this April.

No matter the form guide when Spieth lands on hallowed Georgia turf, he typically plays some of his best stuff.

Given he has been struggling to keep the ball on the planet of late, even the tie for 21st and 46th can be classed as very fair efforts.

An in-form Jordan Spieth is a thrilling sight to behold, and his recent resurgence is encouraging for his fans who want to see him return to past glories.

Granted, his last two performances on the PGA Tour don’t make up for the last few years of mediocrity, but it's just great to have him back in the fray again.

Spieth's best golf is returning in an exciting period for the sport. We cannot wait to see Spieth mixing it with the likes of Dustin Johnson, Rory McIlroy, Jon Rahm, Justin Thomas, Brooks Koepka and Bryson DeChambeau down the back nine on a Sunday.

Who knows, we might just get our wish as early as this weekend.