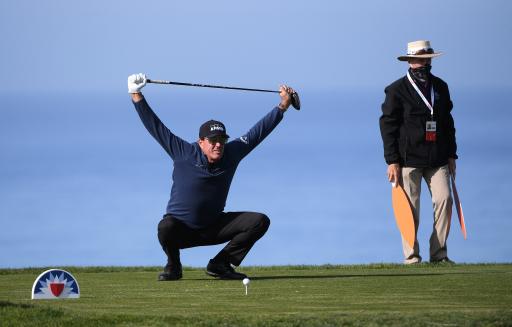 Phil Mickelson might still have a burning ambition to win the US Open to complete golf's career Grand Slam, but now at the age of 50 that dream is becoming not so much of a reality as time goes on.

The five-time major champion might be mixing it up on the senior Champions Tour as well as still competing on the PGA Tour, a circuit where he has won 44 times, but Mickelson's agent has recently revealed Lefty could soon be set for a career on television as a golf analyst - just as the likes of Sir Nick Faldo, Paul Azinger, David Duval, Brandel Chamblee and many others have done in the past.

Mickelson will certainly be dabbling with the idea anyway.

"It wouldn’t surprise me if in the next 12 to 24 months you might see more of Phil on the air."

Mickelson is currently languishing at 89th in the world, which marks his worst world ranking since 1993.

Since finishing tied second at last year's WGC-FedEx St Jude Championship in August, Mickelson may have won twice on the Champions Tour but his best result on the PGA Tour is a tie for 44th at the Safeway Open.

Worryingly, Mickelsons has also missed five of his last 10 cuts, including last week's AT&T Pebble Beach Pro-Am - a tournament he has won a joint record five times with Mark O'Meara, and most recently in 2019.

NEXT PAGE: RICK SHIELS REVEALS WHY HE HAS SPLIT WITH NIKE GOLF