Justin Thomas and Smylie Kaufman TROLLED by the PGA Tour on Twitter!

Justin Thomas and Smylie Kaufman were on the end of a PGA Tour joke, but they did ask for it. 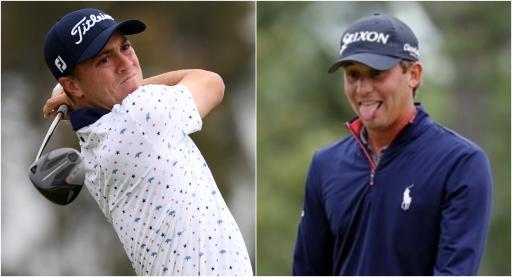 The QBE Shootout at Tiburon Golf Club is always a fun event where players can enjoy a more relaxed tournament week compared to a regular PGA Tour stop.

Kevin Na poked fun at his partner Jason Kokrak for not contributing during the front nine of their final round on Sunday. But the three-time PGA Tour winner arrived on the back nine.

The American pair birdied 12 of their last 13 holes to reach 33-under-par for the tournament and won by one shot ahead of Sam Burns and Billy Horschel.

This scintillating play is not what you would have associated with the 2017 QBE Shootout pair of Justin Thomas and Smylie Kaufman. In fact, they called on the PGA Tour to dig up some rather embarrassing footage.

RELATED: THORBJØRN OLESEN: HOW DID THE JURY CLEAR THE DANISH GOLFER OF MULTIPLE CHARGES?

Do yall happen to have the live footage of @JustinThomas34 and I on the 4th hole lipping in a putt for bogey in the scramble format?

For PGA Tour players, getting a bogey in this format would be very rare. But not only did Thomas and Kaufman achieve this, they almost made a double bogey.

"Do yall happen to have the live footage of @JustinThomas34 and I on the 4th hole lipping in a putt for bogey in the scramble format?" Kaufman tweeted to the PGA Tour.

The 2016 Shriners Hospitals for Children Open winner didn't get his wish, however, the PGA Tour came back with an even more damning piece of footage.

No luck in the archives.

Hope this recreation will suffice pic.twitter.com/Fv9394WcIA

RELATED: QBE SHOOTOUT: HOW MUCH DID KEVIN NA AND JASON KOKRAK EARN FOR THEIR VICTORY?

The account tweeted a video of Thomas and Kaufman hitting shots into water hazards, trees and hitting shots from the trees too. A brutal response indeed.

"Hahahahahaha yes," the 2017 PGA champion tweeted to the PGA Tour. He certainly saw the funny side of things. It is a shame that the original footage could not be discovered. Judging by Kaufman's description, it sounded like chaos.

"From start to finish that hole was a debacle. We had 2 balls that landed in the middle of the lake. 2 hiya’s. 2 chips from "unknown" and 2 shaky 5 footers. Meanwhile, @Lexi and @b_dechambeau made the easiest birdie of all time."

The pair went on to finish tied 5th at the event which Kaufman described as a win itself, based on their shaky start.