Thorbjørn Olesen: How did the jury clear the Danish golfer of multiple charges?

The Danish golfer was cleared of multiple charges...this is how they reached their verdict. 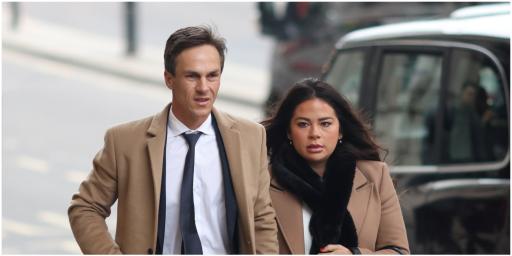 Thorbjørn Olesen is now free to continue his golf career after being cleared by a jury of multiple charges.

Olesen apologised for his conduct on board a British Airways flight and said in a statement: "I have a paid a heavy price for my mistake."

The Dane, 31, denied and was cleared of sexual assault, assault by beating and being drunk on an aircraft.

A jury took less than an hour to clear him of the three charges at a London court, which had he been convicted of would have ended his career.

As ever when there is a sport star in the dock facing serious charges, there is a high level of media interest.

A throng of reporters sat in the crown court and observed the two-day trial, informing the public of what is being said.

It is difficult to convey the entirety of a criminal trial to the public.

There are countless documents, witness statements, speeches and evidence that needs to be poured over.

After the prosecution and the defence have presented their cases, there comes a key point in the trial.

The judge will sum up the case and give the jury legal directions.

Olesen's trial was interesting as his barrister ran the defence of automatism (he was not in control of his behaviour).

What did the judge say?

After the judge sums up the what the prosecution has said, including what witnesses have claimed, he has to tell the jury how to apply the law.

The legal directions can be time consuming, but it is a vitally important part of the trial.

In simple terms, the directions are a essentially a flowchart of questions the jury need work through to answer so they can find a defendant guilty or not guilty.

What happened in the Olesen trial?

GolfMagic asked the court to provide a copy of the legal directions that were given to the jury in this trial.

That better helps us understand how the jury reached their verdict.

It can be complicated, but this is what the judge told the jury:

1. As a matter of law, in most cases before the
criminal courts, voluntary or self induced
drunkenness or intoxication is not a defence.

A defendant cannot avoid responsibility for his
actions by claiming that it was the drink or drugs
or a combination of the two which caused him to
commit the offence.

2. There remains a defence of automatism. That is
where the defendant acts without any voluntary
control caused by taking drugs.

3. This defence can only arise in limited
circumstances where a defendant takes a substance
which is not known for producing states of
unpredictability or aggression in the taker but
then suffers such an adverse reaction such as to
take away his ability to act voluntarily and thus
he acts as an automaton.

4. If that happens then a defendant will not be guilty
of the ensuing criminal acts provided that he did
not act recklessly in taking the substance in the
first place.

5. The Crown puts its case in two ways

6. First, it states that JTO knew what he was doing
and was able to exercise control over his actions.
He was not acting in a state of automatism and thus
he was responsible for his actions.

7. Secondly, even if he was in a state of automatism,
the Crown states that he brought it about himself
by acting recklessly in taking the zolpidem
tablets, whether by itself or when he had been
drinking and taking other medication.

Was JTO able to exercise any control over his
actions as alleged in each count?

If you are sure that he was, then you must find him
guilty of the count upon which you are dealing.

If you are not sure, then you will have to consider
the question of JTO’s behaviour and whether he was
reckless.

When JTO took the drug, was JTO aware of that there
was a risk that it might lead to such conduct as
occurred but went on to take that risk when it was
unreasonable for him so to do in the circumstances
known to him?

[NB : this is not necessarily an exhaustive list
nor is it in any order of importance].

[3] The circumstances in which JTO took the
substances.

[4] JTO’s knowledge and/or experience of alcohol
and/or the drug[s] concerned and the effects of
taking them as a combination.

[5] The evidence of the experts as to the effects.
[6] Any evidence of JTO's conduct which is
relevant.

[7] What JTO did and said at the time both before
during and after the alleged offences.

If you are sure that JTO was reckless, then you
must find him guilty.

If you are not sure, then you must find him not
guilty.

This information helps us better understand the jury's route to verdict.

Olesen later released a statement after he was cleared.

"I want to apologise wholeheartedly to everyone on board the flight from Memphis to London on 29 July 2019 who was affected by my behaviour.

"I do not remember anything that happened after take-off, but I am embarrassed and ashamed by the account of my actions that was outlined during the trial. My behaviour was completely out of character and nothing like this has ever happened to me before or since.

"My actions resulted from taking powerful sleeping pills I had not taken before and my sole intent was to ensure I managed to sleep on a transatlantic flight after an exhausting playing schedule. I have paid a very heavy price for my mistake. This case has had a devastating impact on me personally, on my family, and on my career.

"I have learned from my mistake and will make sure I never put myself in a similar position again. I now want to focus on my golf, free from distractions, and to repay the trust of everyone who has kept faith in me throughout this very difficult time."